Why Gold Appears Unresponsive to Inflation Fears &amp; Tech Levels That May Change That

Why Gold Appears Unresponsive to Inflation Fears &amp; Tech Levels That May Change That

If you were to analyze gold’s choppy price action over the last three months and compare that to the rapid rise witnessed in July and August of last year, you may be wondering if there really is any credibility to recent inflation fears.

While it is not entirely accurate to compare current gold prices to those during the hard lockdowns of the pandemic, it does however help make the point that gold functions better as a long-term hedge against inflation and doesn’t necessarily track inflation in the short to medium-term. Those expecting gold to rise at a rapid rate, in response to rising inflation expectations, may be in for a long ride.

As major US companies report on their Q3 earnings, the issue of supply chain challenges and expectations of increased input costs is becoming apparent. General Electric CFO Carolina Dybeck Happe mentioned that the company expects significant [inflationary] pressure in 2022. 3M CEO Mike Roman also alluded to passing on higher costs to consumers, admitting that inflation effects have materialized way sooner than anybody thought.

Bitcoin looks to have captured a significant amount of interest due to it being widely viewed as an appreciating, speculative ‘asset’ and hedge against inflation. Trader and hedge fund manager, Paul Tudor Jones recently admitted that he prefers cryptocurrencies to gold as an inflation hedge. Bitcoin has risen way beyond that of gold this year, explaining why so many have opted for the switch to the less traditional asset class.

Gold prices tend to respond to government bond yields, like the US 10 year yield, which has staggered higher in recent weeks as the market anticipates eventual rate hikes. Such hikes impact negatively on the non-interest-yielding yellow metal as the opportunity cost for holding gold rises. With that being said, the US Federal Reserve is still some way from hiking rates as the latest summary of Fed projections now shows that members anticipate a rate hike in 2022.

However, the Fed will first need to reduce financial stimulus before a single rate hike is considered (under normal circumstances) and this allows for the possibility of short term appreciation in gold if the November 4th Fed meeting is viewed as bearish by the market.

Tomorrow sees the ECB and BoJ provide updates on their respective monetary policy meetings regarding interest rates and stimulus measures.

From a technical point of view gold has a rather bearish posture to it. After the 2020 high, the precious metal has made successive lower highs and even broke below long-term support, which it now looks to test. 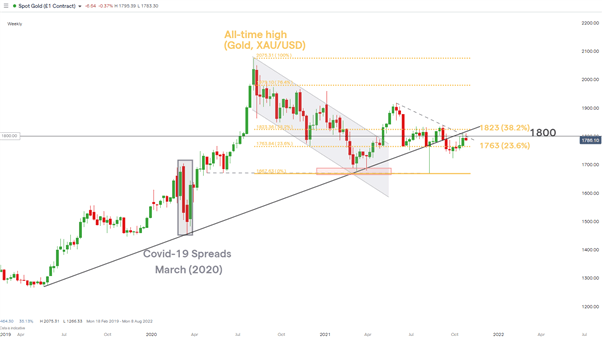 On the daily chart, gold has traded – for the most part- in a sideways manner between the major zones marked in blue at the 1836 level and in red by the 1754 – 1764 zone. Price action has been trading within a bullish channel where a bounce off channel support could be indicative of an attempt to break above the long term trendline, towards 1835. A break and hold above 1835 would warrant a reassessment of the larger bearish theme.

On the other hand, a bounce lower off the long-term trendline and break below the ascending channel would bring the zone of support (1754 – 1764) into focus. A break below the support zone provides further support for bearish continuation setups. 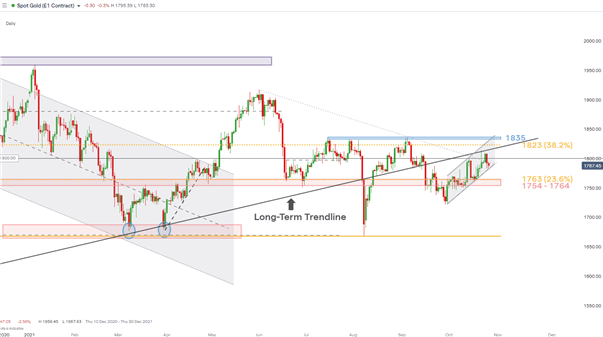