Gold price action looks set to close slightly higher for the week, around the 1800 mark, as the precious commodity exhibits mean reversion around this psychological level once again. Looking back as far as July of last year, gold has traded largely within the 1754 – 1835 range with occasional breaches either side – with such breaches appearing to be narrowing down.

Alongside the long term channel, the daily gold chart presents a convergence pattern akin to a triangle, where we are witnessing lower highs and higher lows, rendering directional plays rather difficult to assess in the absence of any real momentum.

The 5 daily candles that make up this weeks trading data points appear to resemble a bear flag with interesting implications. Should price action break convincingly below the lower bound of the bear fag, the implied move sits around the 1764 zone of support. Ideally, there would need to be a break of the 1790 support level before assessing continued moves lower.

Should the bear flag play out, there is potential for a prolonged period of lower prices as the lower bound of the triangular converging pattern would no longer be relevant. On the other hand, should the move associated with the bear flag fail to materialize, levels of resistance remain at 1823 and the significant 1835. 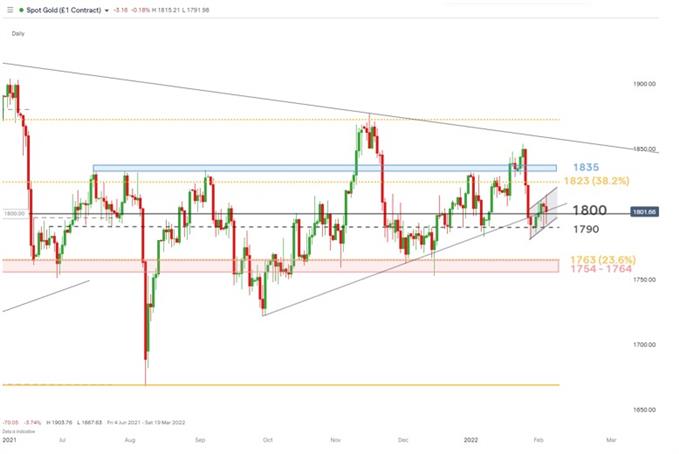 The weekly chart further reiterates the long term narrowing pattern that has taken shape since gold printed the all-time high in August of 2020. Gold currently trading at the mid-level of the 1764 – 1835 range, further reinforcing the precious metal’s mean reversion tendencies witnessed over the last 7 months. 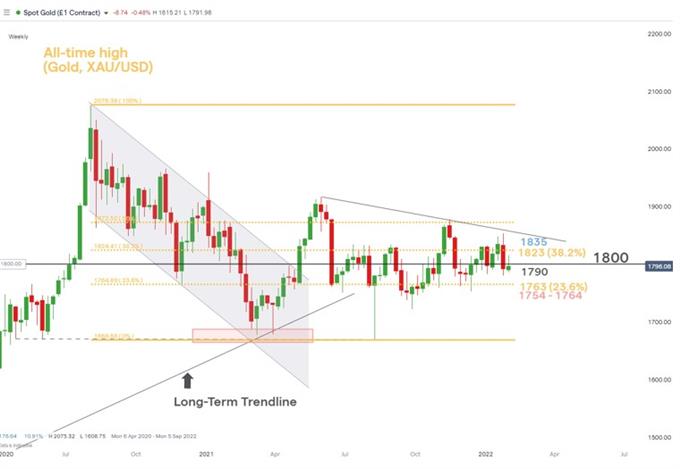