USD/JPY stages a seven-day rally despite the recent weakness in longer-dated US Treasury yields, and the bullish momentum underlying the exchange rate looks poised to persist as long as the Relative Strength Index (RSI) holds above 70.

USD/JPY trades to a fresh yearly high (118.45) as it extends the series of higher highs and lows from last week, and the exchange rate is on the cusp of testing the 2017 high (118.61) as the Federal Reserve is widely expected to deliver a 25bp rate hike.

At the same time, the update to the Fed’s Summary of Economic Projections (SEP) may reflect an adjustment in the exit strategy if Chairman Jerome Powell and Co. forecast a steeper path for US interest rates, and the Federal Open Market Committee (FOMC) may prepare American households and businesses for a series of rate hikes as consumer prices increase for sixth consecutive months.

In contrast, the Bank of Japan (BoJ) is expected to retain the current policy as the central bank pledges to “expanding the monetary base until the year-on-year rate of increase in the observed consumer price index exceeds 2 percent and stays above the target in a stable manner,” and Governor Haruhiko Kuroda and Co. may continue to endorse a dovish forward guidance for monetary policy as the BoJ “will not hesitate to take additional easing measures if necessary.”

In turn, USD/JPY may continue to trade to fresh yearly highs amid the diverging paths between the FOMC and BoJ, but a further appreciation in the exchange rate may fuel the tilt in retail sentiment like the behavior seen during the previous year. 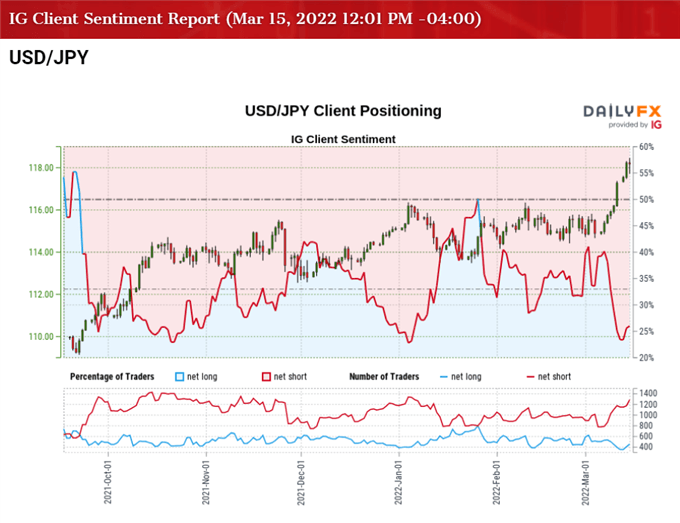 The IG Client Sentiment report shows only 22.42% of traders are currently net-long USD/JPY, with the ratio of traders short to long standing at 3.46 to 1.

The number of traders net-long is 9.91% lower than yesterday and 17.70% lower from last week, while the number of traders net-short is 7.20% higher than yesterday and 39.94% higher from last week. The decline in net-long position could be a function of profit-taking behavior as USD/JPY trades to a fresh yearly high (118.45), while the jump in net-short interest has fueled the tilt in retail sentiment as 26.48% of traders were net-long the pair last week.

With that said, USD/JPY appears to be on track to test the 2017 high (118.61) as it extends the series of higher highs and lows from last week, and the bullish momentum underlying the exchange rate looks poised to persist as long as the Relative Strength Index (RSI) holds above 70. 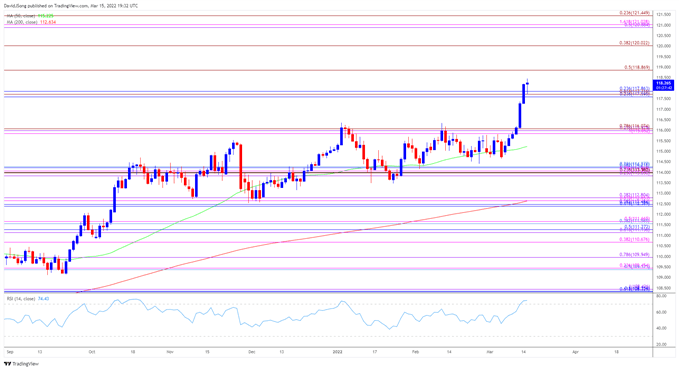