USD/CAD snaps the recent series of higher highs and lows as the Bank of Canada (BoC) delivers a 100bp rate hike, and the exchange rate may continue to give back the advance from the monthly low (1.2837) as it appears to be reversing course ahead of the yearly high (1.3083).

USD/CAD trades to a fresh weekly low (1.2937) as the BoC warns that “inflation in Canada is higher and more persistent than the Bank expected in its April Monetary Policy Report (MPR),” and the shift in the central bank’s approach in normalizing monetary may lead to a larger pullback in the exchange rate as Governor Tiff Macklem and Co. plan to “front-load the path to higher interest rates.”

As a result, USD/CAD may track the monthly range ahead of the Federal Reserve interest rate decision on July 27 as the central bank is expected to deliver another 75bp rate hike, and more of the same from the Federal Open Market Committee (FOMC) may have a limited impact on the exchange rate as Chairman Jerome Powell and Co. appear to be reluctant to implement a 100bp rate hike.

In turn, the advance from the monthly low (1.2837) may continue to unravel as the BoC normalizes monetary policy at a faster pace, and a further decline in the exchange rate may lead to a flip in retail sentiment like the behavior seen earlier this year. 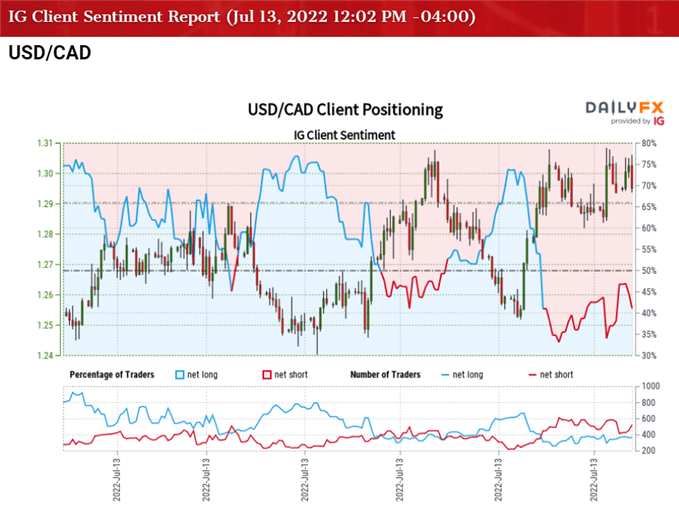 The IG Client Sentiment report shows 43.11% of traders are currently net-long USD/CAD, with the ratio of traders short to long standing at 1.32 to 1.

The number of traders net-long is 6.01% lower than yesterday and 0.84% higher from last week, while the number of traders net-short is 9.70% lower than yesterday and 17.10% lower from last week. The rise in net-long interest has helped to alleviate the crowding behavior as 41.53% of traders were net-long USD/CAD last week, while the decline in net-short position comes as the exchange rate trades to a fresh weekly low (1.2937).

With that said, USD/CAD may face a larger pullback over the coming days as it snaps the recent series of higher highs and lows, and the exchange rate may track the monthly range ahead of the FOMC rate decision as it appears to be reversing course ahead of the yearly high (1.3083). 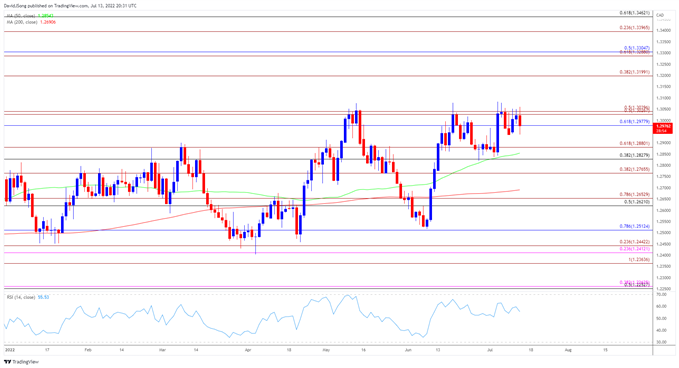