USD/CAD trades to a fresh weekly high (1.2743) as the Bank of Canada (BoC) sticks to the sidelines at its first meeting for 2022, and fresh data prints coming out of the US economy may push the exchange rate towards the monthly high (1.2814) as inflation is expected to increase for the fourth consecutive month.

USD/CAD extends the advance from the start of the week as the Federal Reserve unveils a more detailed exit strategy, and evidence of persistent inflation may put pressure on the Federal Open Market Committee (FOMC) to implement a series of rate hikes as the central bank insists that “it will soon be appropriate to raise the target range for the federal funds rate.”

The update to the Personal Consumption Expenditure (PCE) Price Index may generate a bullish reaction in the US Dollar as the Fed’s preferred gauge for inflation is expected to increase to 4.8% from 4.7% per annum in November, which would mark the highest reading since 1983.

As a result, the US Dollar may continue to outperform its Canadian counterpart as the Fed appears to be on track to unload its balance sheet later this year, and a further appreciation in USD/CAD may continue to alleviate the tilt in retail sentiment like the behavior seen during the previous year. 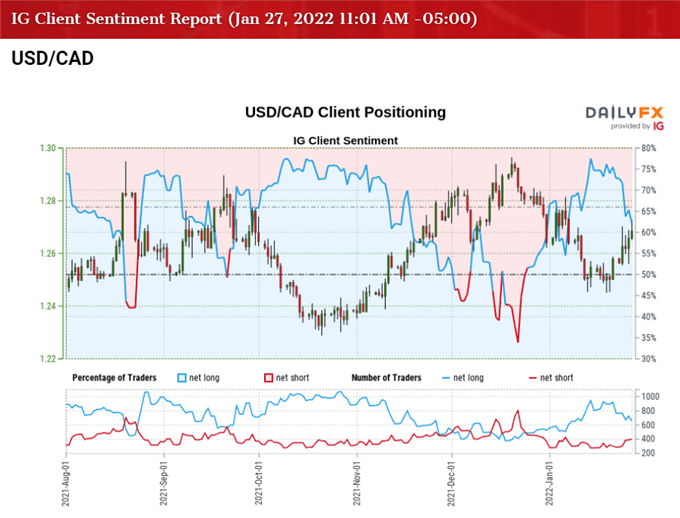 The IG Client Sentiment report shows 62.98% of traders are currently net-long USD/CAD, with the ratio of traders long to short standing at 1.70 to 1.

The number of traders net-long is 11.55% lower than yesterday and 27.01% lower from last week, while the number of traders net-short is 8.87% higher than yesterday and 17.73% higher from last week. The decline in net-long position could be a function of profit-taking behavior as USD/CAD trades to a fresh weekly high (1.2743), while the rise in net-short interest has helped to alleviate the tilt in retail sentiment as 67.05% of traders were net-long the pair earlier this week.

With that said, the update to the US PCE Price Index may fuel the recent advance in USD/CAD if it shows another uptick in inflation, and the decline from the December high (1.2964) may turn out to be a correction in the broader trend as the FOMC lays out a more detailed exit strategy.