USD/CAD extends the series of lower highs and lows from last week’s high (1.2797) on the back of US Dollar weakness, and the exchange rate may continue to depreciate over the coming days as it reverses course ahead of the January high (1.2814).

USD/CAD remains under pressure following the kneejerk reaction to the US ISM Manufacturing survey, and the exchange rate may continue to give back the advance following the Federal Reserve interest rate decision as fresh data prints coming out of the economy point to a slowing economy.

Looking ahead, the update to the US Non-Farm Payrolls (NFP) report may reinforce a weakened outlook for growth as employment is expected to increase 153K in January after increasing 199K the previous month, and a dismal development may produce headwinds for the Greenback as it puts pressure on the FOMC to delay normalizing monetary policy.

With that in mind, USD/CAD is likely to face increased volatility later this week as Canada’s Employment report is anticipated to show the economy shedding 117.5K jobs in January, and the data prints may shake up the near-term outlook for the exchange rate as the Bank of Canada (BoC) “expects interest rates will need to increase, with the timing and pace of those increases guided by the Bank’s commitment to achieving the 2% inflation target.”

Until then, USD/CAD may stage a larger pullback as it reveres course ahead of the January high (1.2814), but the tilt in retail sentiment looks poised to persist as traders have been net-long the pair since late-December. 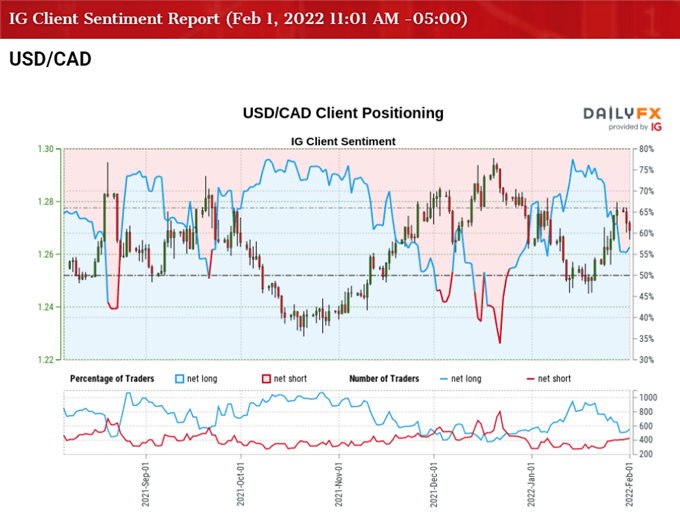 The IG Client Sentiment report shows 59.49% of traders are currently net-long USD/CAD, with the ratio of traders long to short standing at 1.47 to 1.

With that said, USD/CAD may face a larger pullback ahead of the key data prints on tap for later this week following the failed attempt to test the January high (1.2814), but the decline from the December high (1.2964) may turn out to be a correction in the broader trend as the FOMC unveils a more detailed exit strategy. 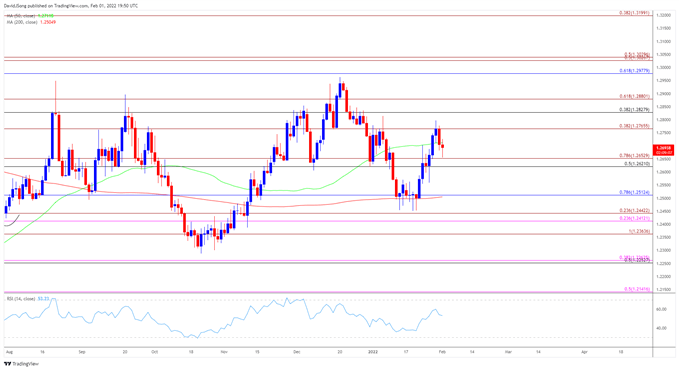