Higher-than-expected US CPI readings spurred fears that the Fed may tighten monetary policy more aggressively in the months to come, sending the DXY US Dollar Index to a weekly high. The consumer price index (CPI) hit a fresh four-decade high of 7.5%, compared to a 7.3% estimate. The core reading, which strips volatile food and energy items, came in at 6% in January, compared to a 5.9% estimate. This suggests that price pressures are probably more ‘entrenched’ than the Fed has anticipated, urging the central bank to raise interest rates faster and end its asset purchasing program sooner at the next policy meeting.

Different from the previous 2015-2018 rate-hike cycle, inflation is much higher this time due to unprecedented monetary and fiscal stimulus put in place to shore up growth amid the Covid-19 pandemic (chart below). Labor market conditions have improved tremendously in recent months, with the latest nonfarm payrolls report showing a robust increase in job numbers and solid wage growth. This suggests that the Fed may tighten monetary policy more aggressively than the previous cycle, paving the way for a stronger US Dollar down the road. 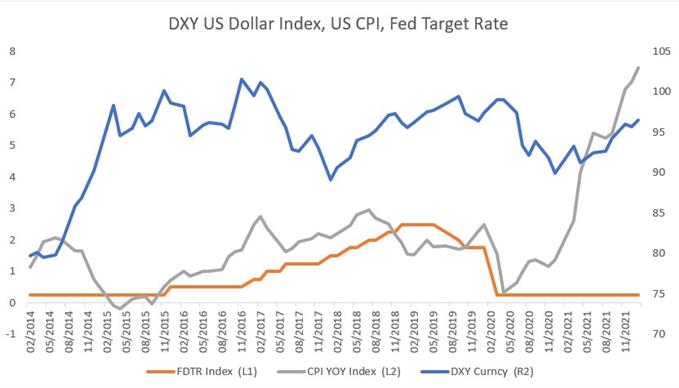 The implied probability of a 50bps rate hike at the March FOMC meeting has surged to 89% from 24% a day ago, according to the CME’s FedWatch tool. This is after St. Louis Fed Chair James Bullard said in a TV interview that the central bank should raise rates by 100bps over the next three meetings, inferring that a 50bps hike in March is possible. He also said that he will not rule out the possibility of an emergency rate hike in between the scheduled policy reviews.

Richmond Fed President Tom Barkin also said he would be ‘conceptually’ open to raise interest rates by half a percentage point, but he doesn’t see a need for it now.

Hawkish-biased comments from Fed officials following the inflation data suggests that the Fed may become more aggressive in tightening, and market participants still have time to price in the expectations. During the previous rate-hike cycle, the US Dollar Index (DXY) rallied fiercely before the actual rate hike kicked off in December 2015, after which it entered a period of consolidation. This time around, market participants may again buy on expectations and then “sell the facts”, rendering the Greenback susceptible to a pullback after the March policy meeting.

— Written by Margaret Yang, Strategist for DailyFX.com To contact Margaret, use the Comments section below or @margaretyjy on Twitter