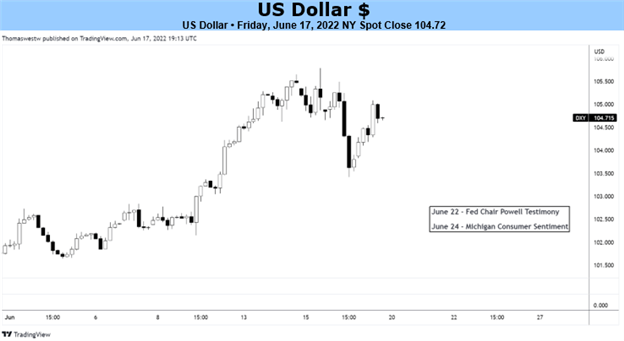 The US Dollar hit a fresh 2022 high ahead of the Federal Reserve interest rate announcement, with the DXY index hitting 105.78 before trimming gains and finishing lower on the week. A volatile geopolitical landscape, volatility in equity markets, and the threat of persistent inflation have aided the Greenback’s climb over the last several months. The chance for a pullback in geopolitical tensions appears untenable at the current moment, given the raging conflict in Ukraine.

However, markets may reassess the Dollar’s position over the coming week as traders gauge market health and recession odds. The FOMC’s 75-basis-point rate hike has assuaged some inflationary fears, but the threat of slower economic growth now weighs heavy on sentiment, especially with market bets showing a good chance for another 75-bps hike at the July meeting. The Fed appears willing to sacrifice economic growth to temper prices.

As recessionary fears ebb and flow so too will the Dollar, given its status as a safe-haven currency. The Atlanta Fed’s GDPNow model sees real gross domestic product (GDP) growth at 0.0% in the second quarter as of June 16. The next update to the model is set for June 27. Upcoming economic events in the United States such as existing home sales, MBA mortgage applications, consumer sentiment and initial jobless claims will be in crisp focus to gauge the health of the US economy in the week ahead.

The Dollar’s major focus, however, is testimony from Federal Reserve Chair Jerome Powell. The central bank chief is expected to provide his bi-annual address on monetary policy to Congress. Mr. Powell will speak before the Senate Banking Committee on June 22. Lawmakers are likely to levy questions about the pandemic response and the overall strength of the US economy. The Greenback may rise if Mr. Powell firms up already strong expectations for further tightening.