The best to break this down is by doing a top-down analysis starting with the daily timeframe. 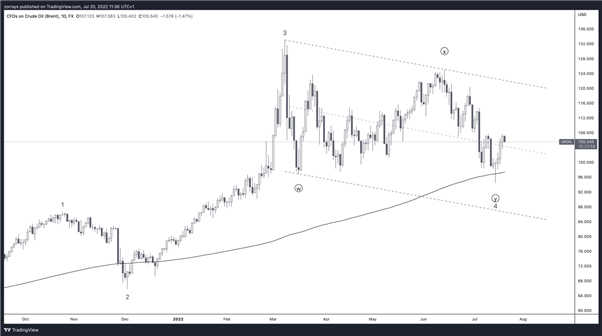 As UK oil progresses into wave 4, it has been unfolding a Double Zigzag pattern. This is when two Zigzags are combined. This is labelled as WXY, as opposed to a regular Zig Zag which unfolds as an ABC. Wave 4 is also contained within a descending channel which provides a good indication that this price action since March 2022 is all corrective. Therefore, UK oil is still holding onto its bullish trend.

Prior to breaking down the structure of this corrective cycle to see if the sequence is completed, I would like to first note that on the daily timeframe that UK oil has rejected off the 200 period Moving Average in black. This the first time ever since wave 2 in the same degree completed back in December 2021 low. 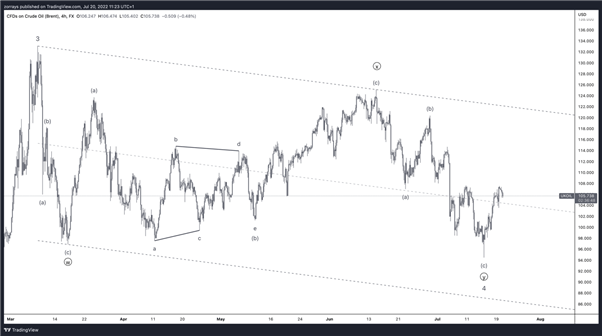 On the 4 hour timeframe it shows that wave 4’s WXY seem to have unfolded as wave ((w)) as a Zig Zag, wave ((x)) also as a Zig Zag with sub-wave (b) as a tringle. This ((x)) connector can usually confuse traders as they miss the triangle.

Finally, wave ((y)) also completed as a Zig Zag and we can see that wave (c) has a completed wave 5 wave sequence which unfolded as an Ending Diagonal.

Since July 14 low at 94.480 developed some strong bullish price action. Now the question is whether this is the start of an advance into wave 5. 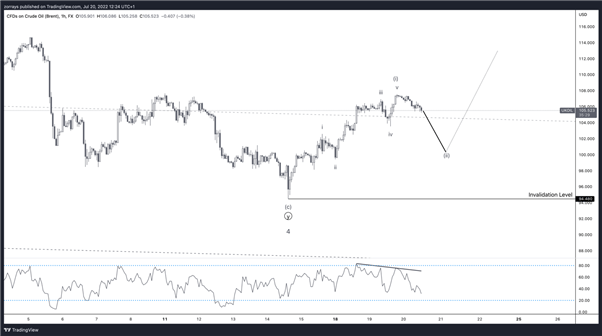 On the hourly timeframe, UK oil climbed in a 5-wave sequence, as opposed to a 3-wave sequence. A clue I take seriously to determine whether the next wave on a higher degree is in play. This is supported RSI divergence.

The next move would be a make it or break it. If UK oil corrects into wave (ii) to the downside, an advance can be expected to the upside. Nevertheless, a break of 94.480 invalidation level would determine that wave 4 is not done yet and further corrective price action is expected.