Swiss Franc Price Forecast: Parity on the Cards for USD/CHF Ahead of SNB Rates Decision

Swiss Franc Price Forecast: Parity on the Cards for USD/CHF Ahead of SNB Rates Decision

Fridays U.S. CPI beat reignited dollar bets causing USD/CHF to test May swing highs. This data print was a key indicator to gauge whether the U.S. economy has peaked (in terms of inflation) after April’s decline. Both core and headline figures surprised markets and reinforced the inflation rhetoric leaving the Federal Reserve with little choice but to continue on its hawkish path. With the U.S. in a relatively strong economic position relative to its European counterparts, the economy can withstand a steeper rate hike trajectory to tackle inflationary pressures. While oil prices remain supported, I do not see inflation lessening and is also apparent in the Swiss market.

Currently the Swiss National Bank (SNB) has adopted a fairly neutral/dovish approach but with inflation rising above 2% in May, money markets are looking to a potential rate hike this coming week with roughly 20bps priced in at the moment. Should the SNB avoid tightening, we could see price action similar to the Japanese Yen (JPY) particularly against those currencies whose central banks are raising rates.

As a precursor to the SNB rate announcement, the Fed rate decision will set it’s interest rate with consensus around a 50bps jump. The U.S. dollar is likely to remain bid leading up to the release leaving little in the way of Swiss Franc support pre-SNB. This being said, U.S. retail sales may take a hit giving some breathing space for USD/CHF bears. 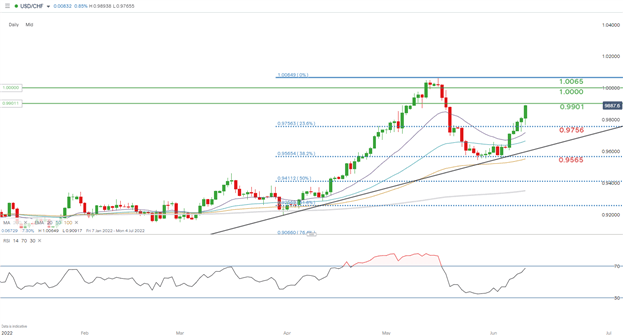 USD/CHF price action shows bulls looking to breach the March 2020 swing high at 0.9901 for the second time since early May 2022. Momentum is consequently reaching overbought levels as shown on the Relative Strength Index (RSI). A confirmation daily candle close above this level could lead to higher highs next week and potentially the elusive 1.0000 parity mark. Should the SNB remain neutral/dovish this level highly probable.

IGCS shows retail traders are currently LONG on USD/CHF, with 62% of traders currently holding long positions (as of this writing). At DailyFX we typically take a contrarian view to crowd sentiment however, due to recent changes in long and short positioning we arrive at an upside bias.