The S&P 500 index attempts to retrace the decline from the start of the month even as the Federal Reserve shows a greater willingness to normalize monetary policy at a faster pace, but fresh data prints coming out of the US may drag on equity prices as the Consumer Price Index (CPI) is expected to increase for the seventh consecutive month.

The S&P 500 index manages to hold above the 50-Day SMA (4425) as it extends the rebound from monthly low (4452), with the index initiating a series of higher highs and lows amid the improvement in investor confidence.

However, the update to the US CPI may curb risk appetite as the headline reading is expected to widen to 8.3% from 7.9% per annum in February, with the core rate of inflation seen climbing to 6.6% from 6.4% during the same period, which would mark the highest reading since 1982.

Evidence of persistent inflation may push the Federal Open Market Committee (FOMC) to adjusts its exit strategy as Governor Lael Brainard insists that the central bank could “reduce the balance sheet at a rapid pace as soon as our May meeting,” and speculation for a further shift in monetary policy may produce headwinds for the S&P 500 index as the FOMC looks embark on quantitative tightening (QT) while delivering a series of rate hikes. 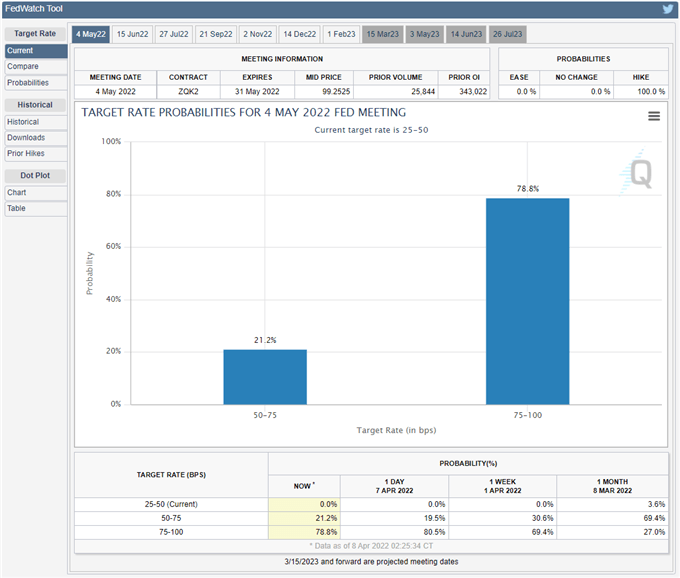 In turn, the ongoing change in regime may undermine the improvement in investor confidence as the CME FedWatch Tool now reflects a greater than 70% probability for a 50bp rate hike at the next Fed interest rate decision on May 4, and another rise in US consumer prices may push the FOMC to normalize monetary policy at a faster pace as the minutes from the March meetings emphasizes that “it would be appropriate to move the stance of monetary policy toward a neutral posture expeditiously.”

With that said, recent price action raises the scope for a larger rebound in S&P 500 index as it appears to be reversing ahead of the 50-Day SMA (4425), but evidence of persist inflation may drag on equity prices as it puts pressure on the FOMC to adjust its exit strategy.