Despite recent volatility on Wall Street, retail traders appear to be increasingly attracted by the discounts being offered by the market. Long exposure is piling up in the S&P 500 and Dow Jones, according to IG Client Sentiment (IGCS). The latter tends to function as a contrarian indicator. With that in mind, if this trend in positioning continues, could this spell more trouble for the stock market? For a deeper dive into IGCS, technical and fundamental analysis, check out the recording of my webinar above!

The IGCS gauge shows that about 71% of retail investors are net-long the S&P 500. Since the majority of traders are biased to the upside, this suggests that prices may continue falling. Meanwhile, upside exposure has increased by 4.49% and 15.26% compared to yesterday and last week respectively. Taking these into consideration, the combination of current and recent changes in positioning is offering a stronger bearish contrarian trading bias. 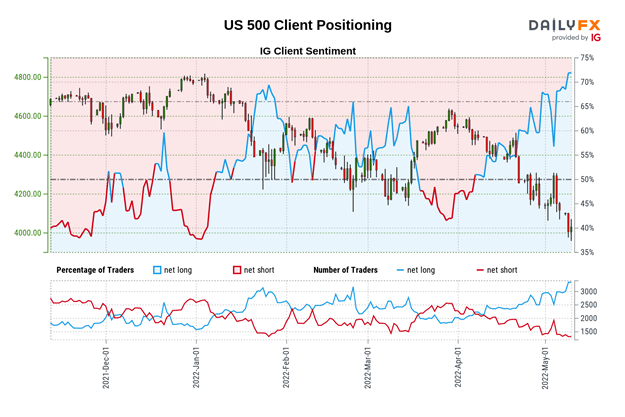 S&P 500 futures recently broke under a bearish Head and Shoulders chart formation, opening the door to extending losses since the end of last year. The support level at 4029 from May 2021 was also taken out, exposing the 100% Fibonacci extension at 3924. Further losses would then place the focus on late March 2021 low at 3843. Immediate resistance could be the neckline of the Head and Shoulders, as well as the 4101 – 4140 former support zone. 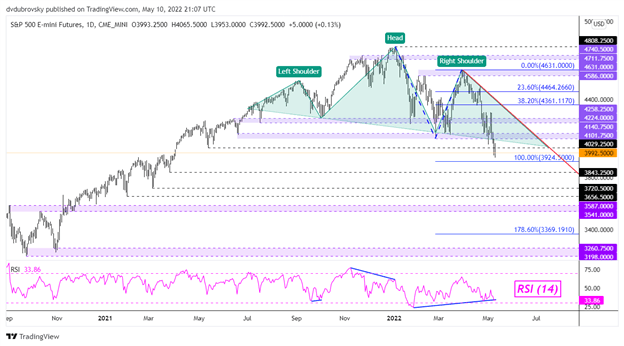 The IGCS gauge shows that about 74% of retail investors are net-long the Dow Jones. Since the majority of them are biased to the upside, this hints that prices may continue falling. This is as upside exposure increased by 7.81% and 27.34% compared to yesterday and last week, respectively. With that in mind, the combination of overall and recent changes in sentiment are offering a stronger bearish contrarian trading bias. 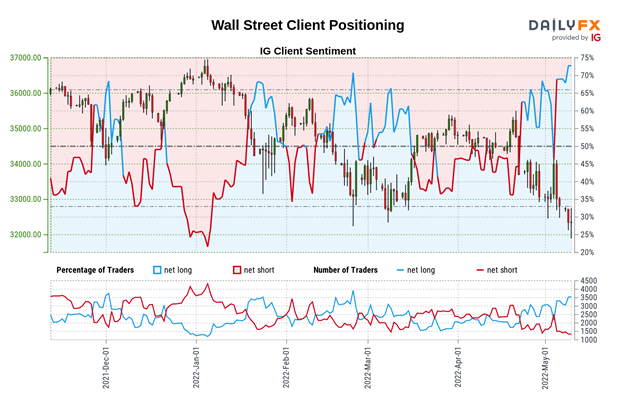 Dow Jones futures weakened further into the critical 31951 – 32521 support zone. On Tuesday, the index was unable to confirm a hold under this range, reinforcing it as support. Confirming a breakout under it could open the door to extending losses. In the event of a turn higher, keep a close eye on the falling trendline from April. It could hold, reinstating the downside focus. 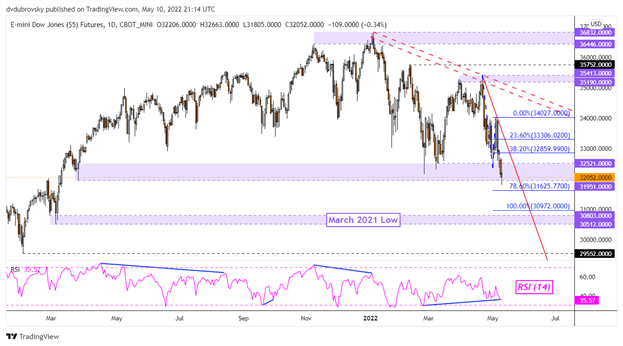