The Russian invasion of Ukraine this week was initially met with platitudes and handwringing that has so often defined the European Union’s and United States’ (“the West”) response to crises in recent years. At first glance, a Russian economy (1) with a debt-to-GDP ratio around 18%, (2) over 80% of government-issued debt denominated in Russian Rubles, and (3) high energy prices having filled Russia’s coffers over the past year, seemed like it would be able to weather any economic or financial repercussions – so long as the invasion of Ukraine proved short-lived.

But as the Ukrainian army and population have mustered a formidable resistance, the European Union’s and United States’ response evolved dramatically. On Saturday, the West announced that some Russian financial institutions would be cut off from SWIFT, the global messaging platform that allows banks to communicate and send funds securely to one another. Japan joined the West on Sunday in such an effort. Russian companies will have a difficult, if not impossible, time importing and exporting goods and services moving forward. 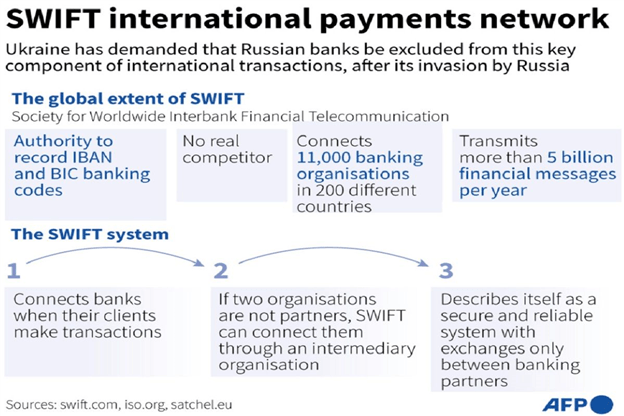 Yet removing Russian access to SWIFT is incomparable to the other effort taken by the European Union and the United States: freezing the Russian central bank’s assets. The Central Bank of Russia (“CBR”) has roughly $630 billion in foreign reserves, most of which are now inaccessible. The immediate effect is that the CBR will not be able to sell foreign currencies (e.g. the Euro) to prop up the value of the Ruble, which was already under a great deal of pressure – falling to all-time lows – after Russia invaded Ukraine.

There’s really no other way to put it: the decision by the West to limit Russian banks’ access to SWIFT and to freeze the assets of the Central Bank of Russia is equivalent to dropping a financial nuclear bomb on the Russian economy. While one of the immediate knock-on effects could be a potential reduction in Europe’s access to energy supplies – uncertain, considering there seems to be a carveout in the SWIFT efforts so that payments can still flow for oil and gas – the other is that the Russian economy will almost certainly descend into a sharp recession.

The Russian economy is now isolated globally, with only China serving as a potential lifeline. But even then, the Chinese government has prohibited state banks from financing purchases of Russian commodities, a sign that China itself is not looking favorably at recent developments. 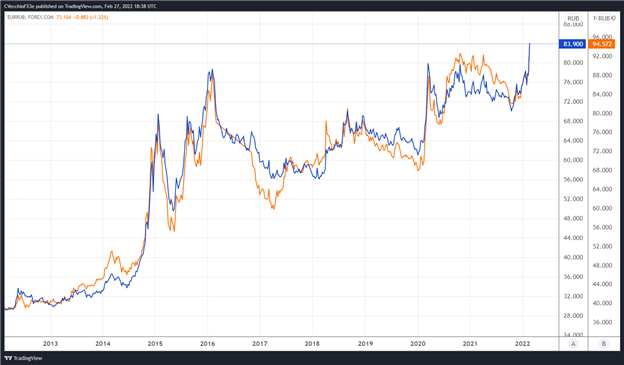 Reports have emerged over the weekend that, in response to the West’s sanctions, bank runs have begun in Russia (as expected). Queues at banks and ATMs are widely reported in both traditional and social media, with Russian citizens no longer able to obtain foreign currencies. Russia’s Tinkoff Bank, the world’s largest digital bank and Russia’s second largest credit card issuer, was quoting EUR/RUB at 163.00 and USD/RUB at 153.00-171.00 – that’s effectively a 100% increase from where the market closed on Friday.

Now unable to import or export goods and services thanks to the SWIFT sanctions, unable to sell foreign currency reserves thanks to the CBR asset freeze, and a Russian economy ringfenced from the global financial system, a currency crisis has emerged for Russia. Capital controls are just around the corner, as are likely interest rate hikes by the CBR to try and stabilize the Russian Ruble – but neither of those will prove effective so long as Russia presses foward with its invasion of Ukraine.