The risk-sensitive New Zealand Dollar is looking higher on Thursday, aided by a softer US Dollar and a rebound in sentiment across broader markets. Wall Street saw another mostly upbeat session in Wednesday trading, despite hotter-than-expected inflation figures. Prices rose 5.4% on a year-over-year basis in the US for July, versus an expected 5.3%, according to a Bloomberg survey. However, core prices, which remove volatile food and energy items, crossed the wires in line with projections.

The Fed favors core readings for calculating policy decisions. When viewing the CPI data on a monthly basis, core prices rose only 0.3% versus 0.4% expected and down from 0.9% in June. That may explain why rate traders didn’t step on the gas to price in a further acceleration in Fed tightening. The market also seems to be more focused on the labor market after capitulating to the Fed’s transitory view on inflation. For now, traders appear comfortable with current rate hike bets.

Elsewhere, China reported new Yuan loans data on Wednesday, which showed a pullback in credit growth for the economy. New Yuan loans fell to CNY$1.08 trillion in July, down from June’s CNY$1.2 trillion figure, according to the DailyFX Economic Calendar. Chinese government bond yields rose modestly after the credit data hit the wires, with the 10-year note’s yield hitting a fresh high for the month before easing slightly. That may indicate that bond traders see easing monetary conditions in the near term.

The People’s Bank of China (PBOC) has been walking a fine line over balancing too much or too little support. On one hand, the central bank is attempting to reign in high commodity prices. Although some key raw inputs, such as iron ore, have eased recently. That may provide the central bank more flexibility in policy decisions. On the other hand, economic conditions remain fragile due to Covid’s Delta variant. Rising cases across multiple provinces are causing concern. In response, authorities are ramping up vaccination efforts.

Turning back to the outlook for today’s trading session, the economic docket provides several possible event risk across Australia, New Zealand, and India. Australia will report consumer inflation expectations for August, while New Zealand is slated to see third-quarter business inflation expectations cross the wires. Later in the day, India will publish industrial and manufacturing production data for June. The major Asia-Pacific economy will also release inflation data for July.

The New Zealand Dollar is on the move higher against the US Dollar after prices gained from the 20-day Simple Moving Average. NZD/USD’s post-wedge breakout lost steam short of the 200-day SMA last week, but upward momentum is back in play. If the current move higher can breach the key moving average, more upside may be on the cards. Alternatively, a reversal lower would have traders looking at the 20-day SMA once more. 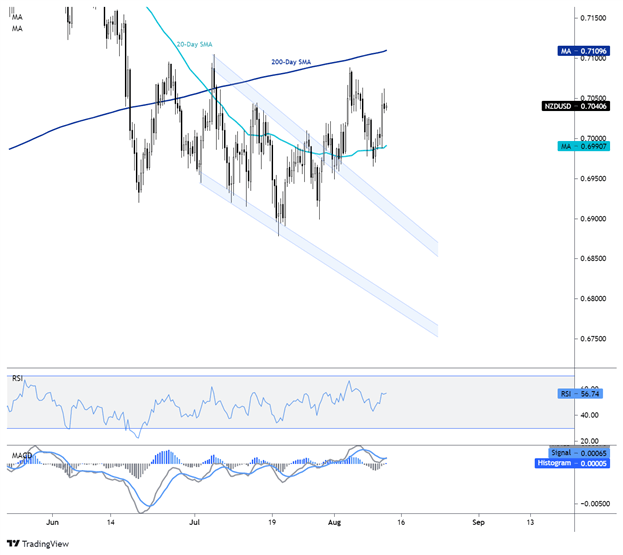