NZD/USD attempts to retrace the decline from the previous week after testing the June low (0.6923), and the Reserve Bank of New Zealand (RBNZ) Monetary Policy Review (MPR) may sway the near-term outlook for the New Zealand Dollar if the central bank adjusts the forward guidance for monetary policy.

NZD/USD appears to be stuck in a defined range as the RBNZ is widely expected to keep the official cash rate (OCR) at the record low of 0.25%, and more of the same from the central bank may produce headwinds for the New Zealand Dollar as board plan “to maintain its current stimulatory monetary settings until it is confident that consumer price inflation will be sustained near the 2 percent per annum target midpoint, and that employment is at its maximum sustainable level.”

However, the RBNZ may start to discuss an exit strategy as Governor Adrian Orr and Co. “expressed greater confidence in their outlook for the economy,” and a shift in the forward guidance may trigger a bullish reaction in the New Zealand Dollar as officials acknowledge “that on current projections the OCR eventually increases over the medium term.” 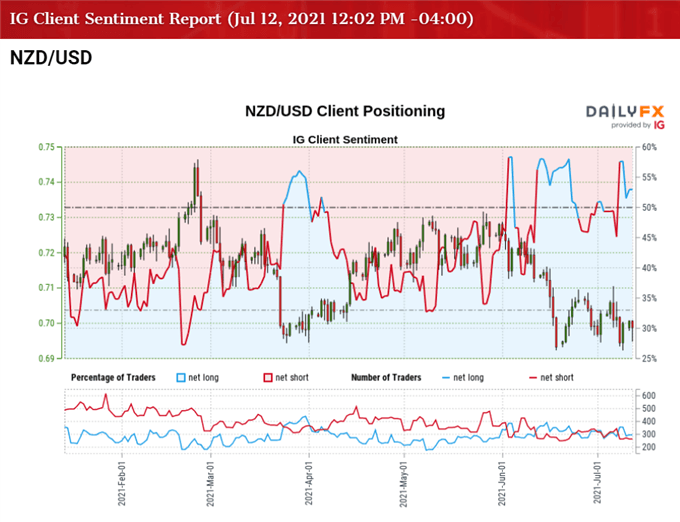 The IG Client Sentiment report shows 52.53% of traders are currently net-long NZD/USD, with the ratio of traders long to short standing at 1.11 to 1.

The number of traders net-long is 16.72% higher than yesterday and 4.59% higher from last week, while the number of traders net-short is 17.05% higher than yesterday and 12.46% lower from last week. The rise in net-long interest comes as NZD/USD bounces back after testing the June low (0.6923), while the decline in net-short position has helped to spur the change in retail sentiment as 43.88% of traders were net-long the pair during the final days of the previous month.

With that said, it remains to be seen if the shift in retail sentiment will reflect the dynamic seen earlier this year as NZD/USD trades below the 200-Day SMA (0.7064) for the first time since June 2020, but the RBNZ rate decision may sway the exchange rate if the central bank adjusts the forward guidance for monetary policy.