Japanese Prime Minister Yoshihide Suga was said to be preparing to go to an election in October by The Mainichi, a local newspaper. The Mainichi cited government officials as calling for the September dissolution of parliament. PM Suga has said a dissolution is not possible at the moment due to the spread of the Covid-19 Delta variant. Nonetheless, the market saw the likelihood of an upcoming election as positive, as it would remove a degree of uncertainty.

APAC equities were also helped higher after strong data releases today. Japanese capital expenditure came in at an increase of 5.3% for the second quarter against expectations of 3.5%, according to a Bloomberg survey. Japanese manufacturing purchasing managers index (PMI) also came in slightly better expected at 52.7 against 52.4 projected.

Australian GDP for the second quarter was 0.7% q/q against Bloomberg survey expectations of 0.4%, while an annual change of 9.6% beat the 9.1% forecast. Lockdowns for the Delta variant had not started in Australia until the last few weeks of June and so their impact is likely to be felt in third-quarter GDP numbers.

The S&P/ASX 200 was down for the day going into local GDP numbers but managed to claw back into the green as a result. The Australian Dollar dismissed the data as it is forward-focused on the potential wind-back of lockdown restrictions going into the end of the year.

Ahead in the US, there is US ADP employment numbers, manufacturing PMI, Institute of Supply Management (ISM) data and construction spending figures.

Today’s move up in the Nikkei 225 took out the early August high of 28,279 but it remains in a downtrend channel. The next resistance level is at the next previous high of 28,852. The support remains at 26,954, the lowest since February. 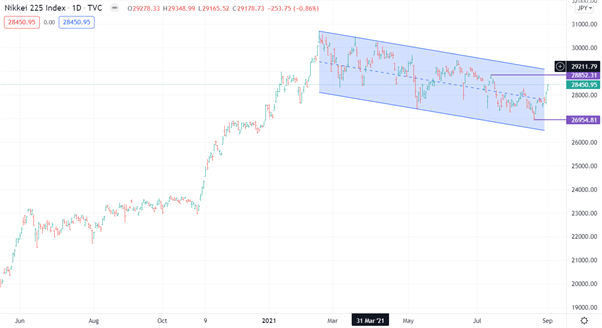