NZD/JPY broke up through multiple resistance levels in the last week to post a 3-year high at 81.224.

In the early stages of the move, the 21-day simple moving average (SMA) crossed above the 100-day SMA to form a Golden Cross which can be a bullish signal.

The Triple Moving Average (TMA) is often seen as a powerful momentum signal when it turns on. There are specific conditions required for the TMA to do so, and so it does not give a signal very often. The NZD/JPY chart below has 3 SMAs. The 21-day, 55-day and 100-day SMAs.

The 55-day SMA appears to be about to cross over the 100-day SMA which would mean meeting the TMA conditions. NZD/JPY has already moved aggressively higher and it remains to be seen if this signal will generate further bullish momentum. 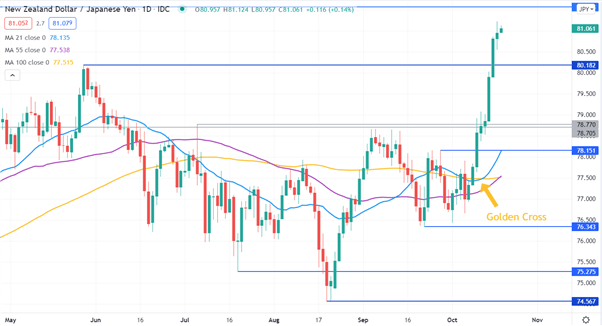 Since breaking through the topside of a descending trend channel early last month, NZD/CHF has traded in a 0.63947 – 0.65816 range. These 2 levels may provide support and resistance respectively.

The NZD strength of late has seen NZD/CHF stretch to touch outside the upper band of the 21-day SMA based Bollinger Band. If there is a close back inside, it might signal that bullish momentum has faded and bearishness could be evolving. 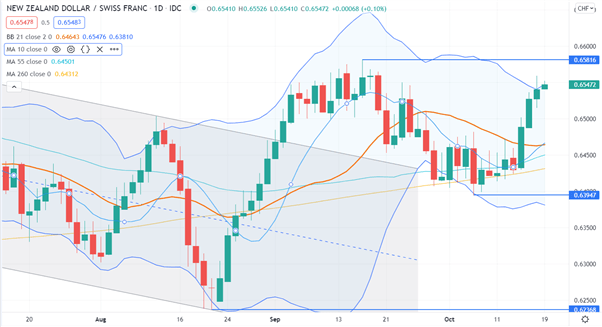 To contact Daniel, use the comments section below or @DanMcCathyFX on Twitte