In part thanks to increasing rate hike odds for the Reserve Bank of New Zealand and in part thanks to improving risk appetite in global equity markets, the Kiwi finds itself positioned to extend its recent rally. More Japanese Yen and US Dollar weakness is necessary, no doubt, but the New Zealand Dollar’s technical posture has improved in recent days. NZD/JPY rates are consolidating in an ascending triangle after an uptrend, while NZD/USD rates have just broken out of a bullish falling wedge to the upside. 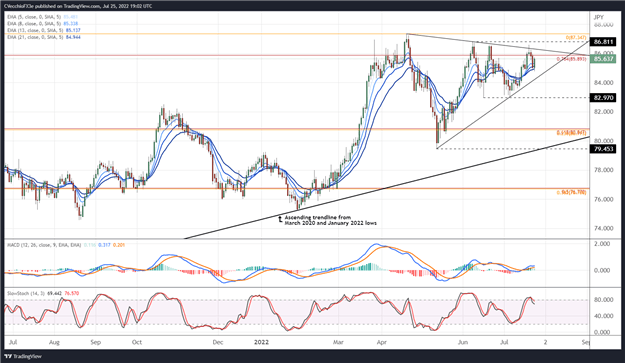 NZD/JPY rates have been rangebound since early-June, but the consolidation is contained with a more significant pattern: a symmetrical triangle that’s been forming since early-April, which developed after a sharp uptrend at the start of 2022. The directional bias would be for a move to the upside, given the preceding move. NZD/JPY rates are above their daily 5-, 8-, 13-, and 21-EMA envelope, which is in bullish sequential order. Daily MACD is trending higher above its signal line, but daily Slow Stochastics have eased out of overbought territory. A move above 86.81 would end the series of lower highs and lower lows since early-June, increasing the likelihood of a return to the yearly high at 87.35. 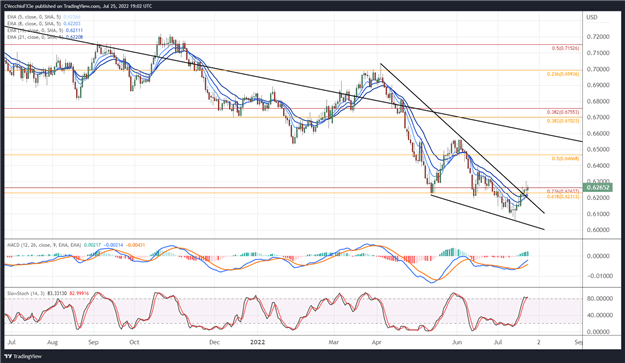 NZD/USD rates have suffered more than their NZD/JPY counterpart in recent weeks, no doubt a result of the rampant strength in USD/JPY rates. But the decline may be over, insofar as a bullish falling wedge has formed against the April (2022 high) and June swing highs. Clearing out the confluence of Fibonacci retracements (61.8% of 2020 low/2021 high at 0.6231 and 23.6% of 2014 high/2020 low at 0.6264) would give great confidence in a more significant bullish reversal developing. A drop below the daily 21-EMA (one-month moving average) would see a return into the falling wedge, which would constitute a failed breakout and thus open the door for a return back to the yearly low beneath 0.6100. 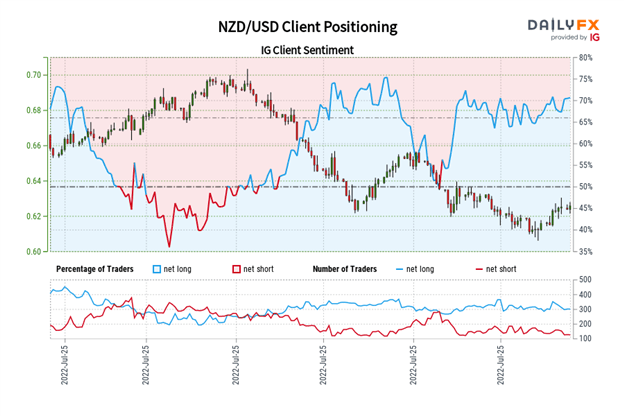 We typically take a contrarian view to crowd sentiment, and the fact traders are net-long suggests NZD/USD prices may continue to fall.

Positioning is more net-long than yesterday but less net-long from last week. The combination of current sentiment and recent changes gives us a further mixed NZD/USD trading bias.