Asia-Pacific traders will look to build on Wall Street’s upbeat session where stocks closed higher, extending a rebound into its second day after a broad risk-off move sank markets on Monday. The benchmark S&P 500 closed 0.82% higher on Wednesday, moving the index within 1% of last week’s all-time high. The foreign exchange market is reflecting the new round of buying, with the risk-sensitive New Zealand Dollar gaining against most of its major currency peers.

The Kiwi Dollar’s fundamental backdrop improved after the Reserve Bank of New Zealand (RBNZ) moved to terminate its Large Scale Asset Purchases (LSAP) program on July 23. The RBNZ’s shift sent rate hike bets skyward as traders priced in the hawkish move. Growing concern about the Delta variant of Covid-19, particularly in the Asia-Pacific region, saw those bets ebb earlier this week. But the recovery in global sentiment has revived the trade, evidenced by a rebound in overnight indexed swap (OIS) rates. This is a derivative instrument reflecting expectations of future changes in the Official Cash Rate (OCR).

Still, Australia highlights the Delta strain’s growing threat in the region, as low vaccination rates force policy makers to ramp up restrictive measures. The bulk of trans-Tasman travel is suspended. Three Australian states under lockdown, accounting for nearly half of the country’s population. New Zealand, on the other hand, remains largely free of community-based infections. That gives the Kiwi economy an edge in prospective growth versus Australia. That disparity is reflected in exchange rates, with AUD/NZD down more than 1.5% on the month. That’s the worst monthly performance this year. A big miss on Australia’s retail sales figure for June dragged the currency pair lower overnight.

Elsewhere, US Dollar strength—driven by strong economic data and Fed rate hike bets—has outperformed the New Zealand Dollar this month, although NZD/USD looks to be eating away at losses following an overnight gain. If risk aversion stays subdued, it will likely bode well for the Kiwi Dollar. The economic docket for the rest of this week is void of any high-impact events, which may leave prevailing risk trends unchecked. Next week will see the island nation’s trade balance figures cross the wires. The Fed’s July rate decision could also spur some significant volatility in NZD/USD next week.

Today’s session, however, offers little fodder for event-driven trading. Japan will release foreign bond investments data for the week ended July 17, and Thailand will see its June trade figures cross the wires. Indonesia is set to keep rates steady at 3.5%, according to the DailyFX Economic Calendar. Tonight, rate traders will set their eyes on the European Central Bank’s rate decision, which could see a volatile reaction in EUR/USD.

An overnight recovery in NZD/USD has put the 0.7000 psychological level back in focus. Prices are drifting higher, with the 38.2% Fibonacci retracement appearing to offer a small degree of resistance currently. A break above the 0.7000 level would see the falling 26-day Exponential Moving Average shift into focus.

Alternatively, a move lower would threaten to add to a series of lower lows. However, the RSI oscillator has not moved in lockstep with prices, forming bullish divergence and thereby hinting that downside momentum is being exhausted. 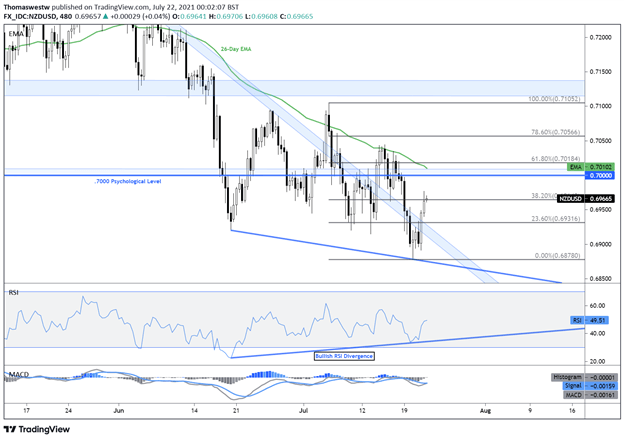