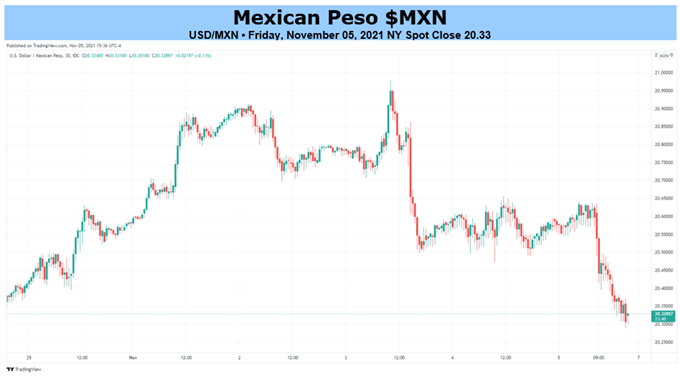 After exploding higher and reaching an eight-month high at 20.98 earlier this week, USD/MXN has started to correct lower after the Federal Reserve adopted a dovish stance at its latest policy meeting, noting that liftoff would require full employment and that board members will be very patient before raising borrowing costs despite elevated CPI readings.

The position taken by the U.S. central bank led to a sharp pullback in Treasury yields, as traders began to scale back expectations that policymakers will be aggressive in withdrawing stimulus to combat rising inflationary forces. This environment has created a constructive backdrop for risk assets, boosting equities and some EM currencies.

Broad-based positive sentiment prevalent in financial markets, coupled with monetary policy divergence between the Fed and Banxico, should support the Mexican peso in the near term. For added context, Banxico has already raised rates three times in 2021 and is likely to do so twice more before the end of the year to fight pervasive price pressures that threaten to de-anchor inflation expectations. In the coming week, for example, the Mexican central bank is expected to raise the overnight rate by 25 basis points to 5.00%, followed by another hike of the same magnitude in December.

From a technical standpoint, after failing to clear Fibonacci and channel and resistance near 21.00, USD/MXN has fallen significantly, breaching key support at 20.45 on its trip lower. This break may accelerate the recent sell-off, but to have more conviction in the bearish narrative, we would need to witness a sustained move below the 200-day simple moving average at 20.15. If this scenario were to play out, price could be on track to test the psychological 20.00 mark in short order.

On the flip side, if bulls retake control of the market and price pivots higher, the 20.45 region should be viewed as the first hurdle containing further upside. However, if buyers manage to push USD/MXN above this resistance decisively, the pair will have few obstacles to reclaim the 21.00 area heading into the second half of the month.