Evergrande, a Chinese property titan, is under severe stress, threatening the broader Chinese real estate and financial markets. The Chinese company is under $300 billion in debt, making it the world’s most indebted real estate company. Credit markets are in disarray over the contagion risks, with big banks suspending loan issuances to housing developers in China. Chinese retail sales for August missed expectations, adding to the sentiment headwinds.

The safe-haven US Dollar saw inflows through the week as traders digested the fragile global risks factors, with the US Dollar DXY Index gaining 0.64%. Risk-sensitive currencies faltered, including the Australian Dollar and New Zealand Dollar. Treasury yields climbed amid strong domestic data prints. US retail sales and consumer confidence measures ticked up from July, showing some relative strength in the economy. Gold fell for a second week against the stronger Greenback, as well as fears over incoming Fed tightening.

This week brings a heavy economic docket, with several high-profile central bank decisions. The Bank of Japan (BoJ), Federal Reserve, and Bank of England (BOE) will release interest rate decisions. The BoJ may downgrade its economic outlook while keeping negative rates in place. Later in the week, some expect the Federal Reserve to detail balance sheet tapering plans. Finally, the BOE is likely to leave in place its Covid stimulus package amid a slowing economy. 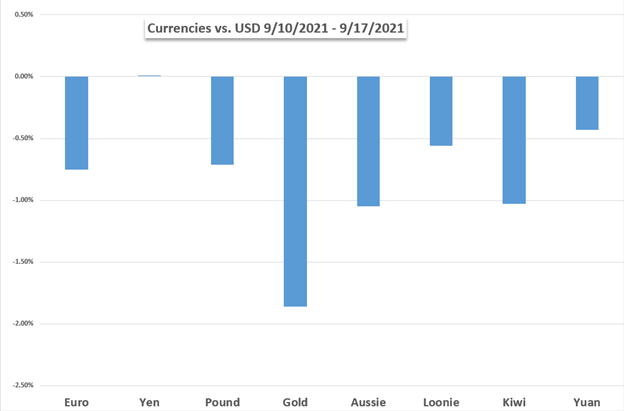 While the meetings of central bankers in the US, Japan and the UK will be front, left and center of traders’ minds this coming week, it would be wise not to ignore next Sunday’s German Federal Election.

The Australian Dollar remains hostage to commodity market gyrations, as low interest rates are unable to attract buyers. Will yields go higher to turn the AUD/USD around?

Aside from the rising uncertainty in China over Evergrande default risks, two central bank decisions will dominate the market theme next week.

The US Dollar (via the DXY Index) is trending higher as markets expect more taper talk at the September Fed meeting.

The Federal Reserve rate decision is likely to sway the near-term outlook for the price of gold as the central bank appears to be on track to scale back monetary support.

The Japanese Yen is eyeing the upcoming Bank of Japan rate decision and CPI figures, but JPY crosses will likely remain dependent on broader market sentiment.

USD/CAD has been trading in a choppy manner, looking for a catalyst which the Fed may provide next week

Stocks appear to be in a corrective phase but could get put to the test; levels and lines to watch in the days ahead.

Gold plummeted for a second week with price testing a critical support pivot more than 9% off the August lows with the rally now probing a major resistance hurdle post-NFPs. Levels that matter on the XAU/USD weekly chart.

GBP/USD’s consolidation could end soon if price breaks out of a symmetrical triangle in play since July. At this time, a downside breakout is likely following the appearance of a death cross.

The US Dollar caught a bid in the late part of last week to set a fresh September high. FOMC is around the corner, are bulls going to be able to push for another fresh high?

The Australian Dollar remains vulnerable to most of its major counterparts, with AUD/USD and AUD/JPY resuming losses. Did AUD/NZD bottom? AUD/CAD may consolidate.