There continued to be hesitancy in global market sentiment. Wall Street started off 2022 on a sour note, though the second week was less painful. Nasdaq 100 futures were little changed. This is as Dow Jones and S&P 500 futures declined about 0.8% and 0.3% respectively. European and Asia-Pacific benchmark stock indices did not fare any better.

Global monetary policy tightening continues to be the theme, with the 10-year Treasury yield back to early 2020 highs. However, markets seemed a bit too optimistic in estimating hawkish Federal Reserve policy bets following a mostly in-line CPI report showing the most aggressive inflation in 40 years.

The US Dollar pulled back across the board, further decoupling itself from rising government bond yields. Some of the best-performing G10 currencies against the Greenback were the Japanese Yen, British Pound and Canadian Dollar. The latter received a boost from rising crude oil prices, with WTI back to October peaks.

A key economic event risk to start off the week will be Chinese fourth-quarter GDP figures. Further information will be revealed into how a fragile property market and government crackdowns on the technology and education sectors have been impacting growth. The latest trade figures for December revealed a sharp slowdown in Chinese imports.

For Yen traders, the Bank of Japan’s interest rate decision is due. All eyes will be on how the central bank will adjust its view on inflation. Those trading the Euro ought to keep an eye out for the ECB account of December’s policy meeting. Canada will release its latest CPI report as Australia drops labor market data. What else is in store for markets in the week ahead? 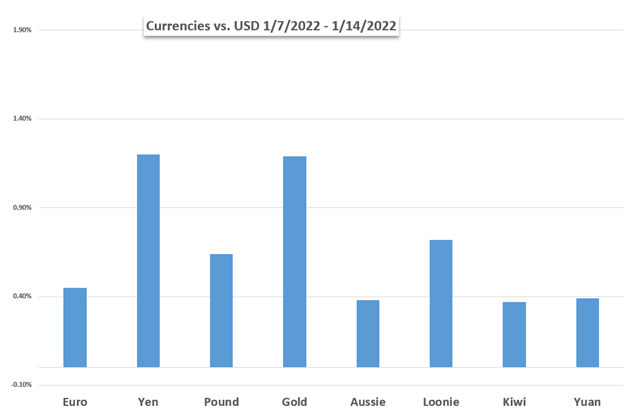 The US stock market is facing sectoral rotation from growth into value stocks, with banks earnings in focus next week. Rising yields and interest rates may undermine tech stocks and support financial names.

Bitcoin (BTC), Ethereum (ETH) – Trying to Build a Base Off Multi-Month Lows

After testing support at the start of the week, Bitcoin has picked up a touch, leaving BTC/USD pretty much unchanged on the week.

The Japanese Yen managed to gain against its G10 peers last week, a rare occurrence as of late. A potential shift in the Bank of Japan’s inflation outlook is on the table. Will USD/JPY react?

The tug of war between market expectations and U.S. economic data continues and with Fed tightening on the horizon, will the dollar make the much anticipated push higher?

The Australian Dollar appreciated last week as the US Dollar took a dive, lifting commodities. Will USD weakness keep commodities and AUD/USD elevated?

The price of gold may consolidate during the Federal Reserve’s blackout period as it trades within the opening range for January.

Euro Forecast: EUR/USD on the Offensive, but Road Ahead Remains Tough

The Euro took the offensive against the US Dollar last week, but the road ahead for EUR/USD remains tough due to ECB and Fed monetary policy divergences.

The Canadian dollar ended the week on a strong note, boosted by a USD sell-off and higher oil prices but trades near a ‘make or break’ decision point.

Sterling surged more than 4.3% off the December lows with the GBP/USD breakout risking exhaustion here into technical resistance. Levels that matter on the weekly chart.

Crude Oil Technical Forecast: WTI at Risk of Brief Pullback Before the Next Leg Higher

Oil maintains a positive outlook in 2022, but its overbought condition and price’s proximity to key technical resistance may pave the way for a brief pullback before the next leg higher.

Gold strength last week has a big level of resistance in play as a new week arrives; levels and scenarios to watch in the days ahead…

Sentiment appears to be shifting around US equities as the Fed gets closer to lift-off. The Nasdaq 100 is already teetering on a trendline that held the lows throughout 2021 trade.