As sentiment remained rosy, the anti-risk US Dollar struggled against the growth-linked Australian and New Zealand Dollars. Still, a push at the end of last week left it higher against the Euro, British Pound and Japanese Yen. Surging front-end government bond yields and some USD strength weakened precious metals such as gold and silver into the end of the week.

Corporate earnings were mostly positive, with some hiccups in the tech sector as Amazon and Apple data missed expectations. US third-quarter GDP slowed as the Fed’s preferred gauge of inflation remained well above target. Meanwhile, reluctance from ECB President Christine Lagarde to push back against market rate hike bets temporarily boosted the Euro.

All eyes turn to the Federal Reserve next week, where quantitative easing tapering is expected. The markets are pricing in two rate hikes by the end of 2022, up significantly since the September rate decision. This also follows some shift in tone from policymakers on inflation. Fed Chair Jerome Powell recently noted upside risks to inflation ahead.

US non-farm payrolls are also expected to cross the wires on Friday, keep a close eye on average hourly earnings, which can have inflationary impacts on the economy. The British Pound will be eyeing the Bank of England interest rate decision. A hike is expected, opening the door for Sterling volatility. Earnings season is still in play. What else is in store for markets? 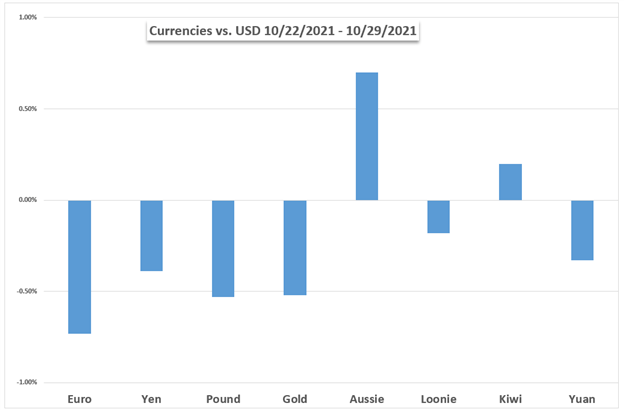 The US Dollar rose as markets await the Fed, the start of QE tapering and NFPs. Still, USD has broadly underperformed in October, it might have its chance to shine next.

The Federal Reserve interest rate decision may influence the US stock market as the central bank prepares to scale back monetary support.

The cryptocurrency market is back on the front foot and pushing higher after a mid-week clear out and both Ethereum and Bitcoin look good to move even higher.

The reaction in the FX markets to last Thursday’s comments by the ECB President was odd: she was dovish, yet the Euro climbed. That suggests more near-term upside for the currency.

Australian Dollar Outlook: RBA in Focus as Commodities Fade. Where to for AUD/USD?

The Australian Dollar found support from a yield uptick on RBA inaction, but commodity weakness kept a lid on it. Will yield or commodities drive AUD/USD?

Stocks continue to be steady overall and in the absence of a sudden shock and downdraft, higher levels look likely.

It was a big week for US Dollar price action but it’s perhaps an even bigger week ahead given the economic calendar, with both NFP and FOMC on the docket.

GBP/USD‘s repeated failures to break above cluster resistance in the 1.3830/1.3855 area is a sign that bullish momentum is fading, a fact that may pave the way for near-term weakness.

Canadian Dollar slipped for the second consecutive week as USD/CAD tries support near the July lows. The Loonie levels that matter on the weekly technical chart.