The Yen has continued its impressive decline against a number of G7 currencies which may be set to continue. The Yen was naturally on the back foot due to a massively supportive Bank of Japan (BoJ) continuing to provide stimulus and ruling out any chance of a rate hike in the near future.

Such a stance contrasts what we are witnessing from other major central banks like the Fed and the Bank of England (BoE) that have already begun the rate hiking cycle with many more priced in before the end of this year. Even the notoriously dovish European Central Bank (ECB) has markets anticipating 50 basis points in hiking before the end of 2022 as inflation runs rampant. In contrast, Japanese inflation (0.9%) is nowhere near that of the US and UK, meaning there is absolutely no need to raise rates anytime soon.

The charts below show how poorly the yen has fared across the board during March. 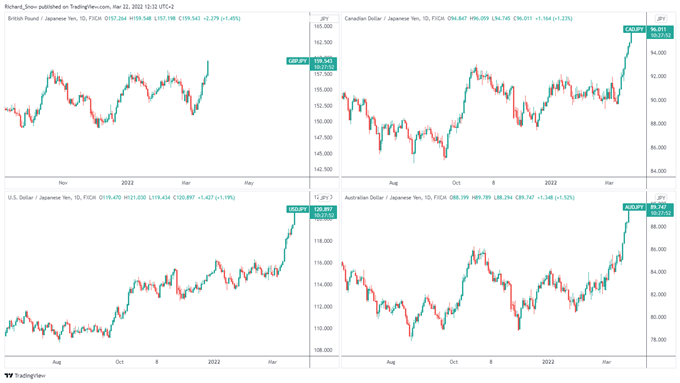 The Japanese finance minister Shunichi Suzuki expressed concern around the recent market moves which were “quite large” and re-affirmed that the government will make use of the covid reserve fund when necessary, in the next fiscal year (From 1 April).

In addition, Suzuki admits that the yen depreciation is both positive and negative for the economy, but currency stability is crucial. Japan imports around 80% of its oil consumption, which continues to weigh on the yen in light of the elevated oil prices, while the weaker yen makes Japanese exports more attractive.

It therefore appears that the current rate of yen depreciation is tolerable, supporting the current bearish trend. Looking at the USD/JPY daily chart, further upside resistance appears around 121.85 followed by 124.15. 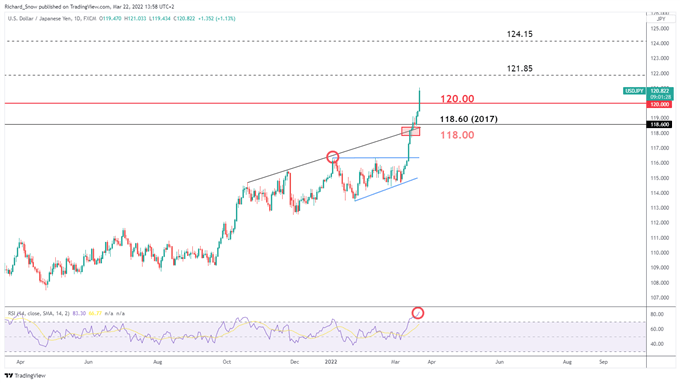 Throughout March, IG retail traders have drastically ramped up shorts in anticipation of a USD/JPY bearish reversal. This is despite the unrelenting move higher in USD/JPY. Positioning is heavily one-sided with more than 3 trades short for every long trade. 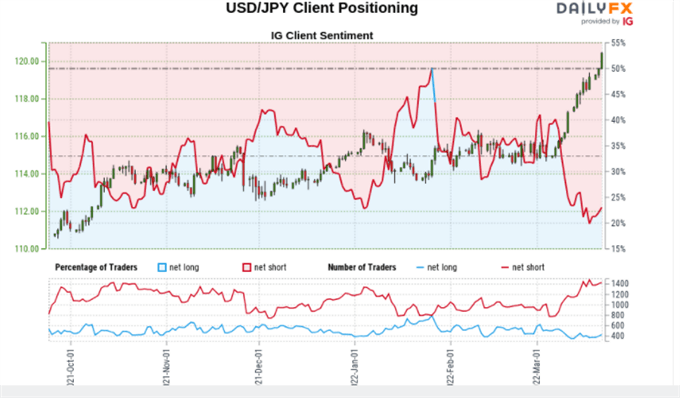