The Japanese Yen is in focus to kick off the trading week, with potentially high-impact economic data due out Monday morning. Japan will report preliminary figures for third-quarter gross domestic product. Analysts expect to see a contraction in growth for Q3 on both a quarterly and annualized basis, at -0.2% and -0.7%, respectively. That would be down from 0.5% q/q and 1.9% y/y in Q2.

The coming quarter’s weakness is thought to be induced by a sharp drop in consumer activity on the back of heightened Covid-19 restrictions put in place through the three months up to September. The Yen has conceded significant ground to the US Dollar during that time, which is hardly a surprise given the Greenback’s underlying fundamentals. That trend may continue, especially if this week’s GDP data comes in short of analysts’ expectations.

Meanwhile, Japan’s new Prime Minister, Fumio Kishida, is finalizing an economic stimulus package targeting the areas hardest hit by the aforementioned restrictions. That stimulus package is expected to be announced sometime late this week. This will give market participants their first taste of how aggressive Mr. Kishida and his government intend to tackle the country’s economic woes. Yen traders may respond positively to an outsized package.

However, Japan faces a tough road ahead compared to its G-7 peers, with the lowest projected rate of growth for this year, according to the International Monetary Fund (IMF). The supply-chain issues plaguing the global economic landscape have hit Japan especially hard. Toyota, a major domestic company, cut output sharply in September due to the ongoing chip shortage. 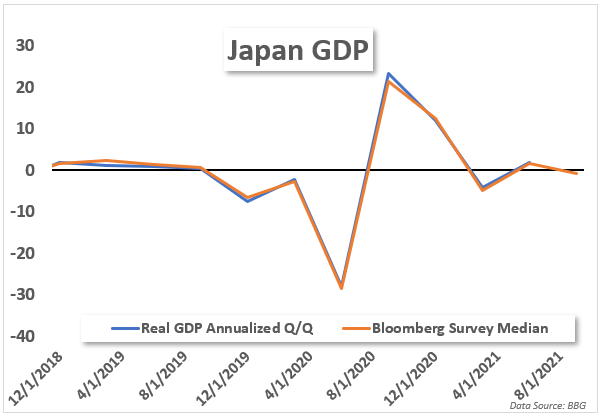