The Japanese Yen has been consistently depreciating against the US Dollar since March 7th. Of the 43 days since then, including today, it has weakened every day except for 6, at the time of going to print. USD/JPY is currently at its highest level since May 2002.

For a deeper dive into the daily data that we have since 1980, we will be look at rolling 30-day periods. The New York close is 5pm local time there, Monday to Friday. The official FX market closes over the weekend.

15,477 daily closes are in the dataset. Only twice since 1980 have there been 25 out of 30 up-days. They both occurred on the most recent Monday and Friday New York close. Needless to say, this a very rare event.

The backdrop to this scarce occurrence is a Japanese government and central bank that are comfortable with a depreciating Yen.

There has been a certain amount of jawboning from Japanese officials expressing concern of the rate of change and that exchange rates should reflect fundamentals. This is largely seen by the market as an attempt to avoid being singled out as currency manipulator by the US.

While the US Federal Reserve and many other central banks globally are in a tightening cycle, the Bank of Japan is maintaining extremely loose monetary policy. This is also playing a significant role in boosting USD/JPY in this unparalleled succession of up-days. 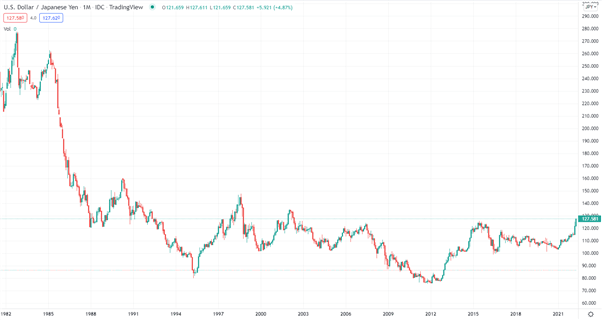