Gold prices recently broke above what appeared to be a bearish pennant pattern, which tends to result in further selling. That was not to be the case as yesterday gold broke out of the symmetrical triangle and advanced to around 1966. However, it was the close to the week that was rather telling for future price action concerning the precious metal as a failed attempt to trade above 1966 materialized – signaling that bullish momentum may have stalled for the time being.

In addition, gold volatility observed by the average true range indicator (ATR) shows that volatility has retreated from the high but still remains rather elevated in general. The decline in volatility is better suited to range trading conditions than breakout situations and thus we may start to observe lower gold prices from the start of next week.

If gold volatility declines even further, the yellow metal could trade towards the pre-invasion level of 1907 – a level that capped recent gold losses. It must be noted that gold prices will continue to react to developments regarding the Ukraine invasion, receiving bids on worsening news – which threatens to derail the weekly bearish outlook. 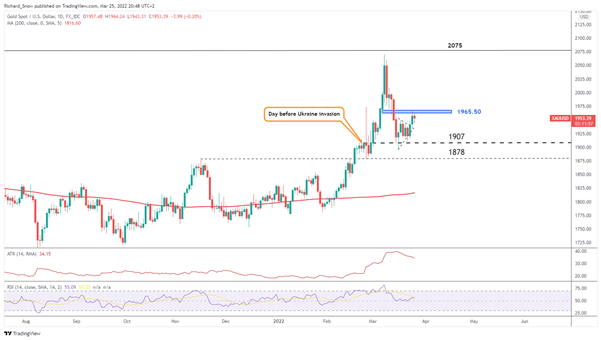