Gold prices trimmed losses late this week, but the bull case still doesn’t look too convincing even after multiple weekly losses. The yellow metal was trading near the lowest levels since mid-February, and almost 10% off its March swing high before the US jobs report. A broad-based rally in the US Dollar has been a strong headwind to bullion prices. The DXY Index gained for a fifth week.

Bears will likely attempt to take advantage of the 3-week downtrend in prices, although there are several levels nearby that may ward off the fourth week of losses. The January swing high at 1853.83 provided support on an intraday basis, and an ascending trendline from the August 2021 low is present just below. Those two levels, if broken, would likely open the door for more selling.

However, a rebound may be in order after prices bounced on Friday, but the upside may be limited. The falling 20-day Simple Moving Average (SMA) could put pressure on the near-term outlook after falling below the 50-day SMA. Moreover, the MACD saw a cross below its signal line on the weekly timeframe, and RSI is heading lower. Selling into strength looks like a prudent play, given the current technical structure. 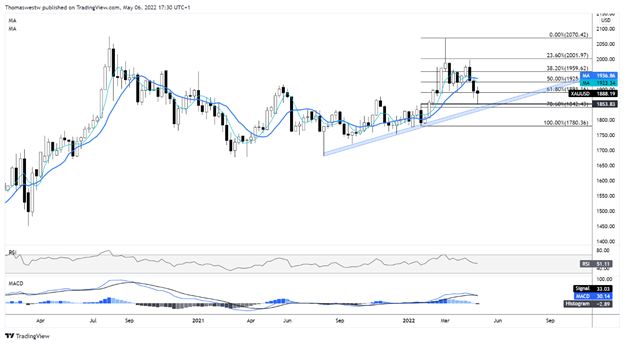