Gold prices aimed cautiously lower over the past 24 hours. The anti-fiat yellow metal was left vulnerable as the ongoing rise in Treasury yields dampened the appeal of the non-interest-bearing asset. Still, it could have been worse. A slightly softer US Dollar worked to cushion the XAU/USD’s downside potential. The haven-linked currency was likely pressured by improving risk appetite as the S&P 500 climbed.

Markets likely welcomed the near-term solution to the US debt ceiling. During Friday’s Asia-Pacific trading session, the Senate extended the cap to December 3rd. That reduced the risk of default, lifted uncertainty and boosted market sentiment. Meanwhile, a pullback in natural gas prices may have also played a role in bolstering risk appetite. Russia seemingly hinted at increasing supplies to Europe.

All eyes turn to the US non-farm payrolls report as traders head into the weekend. The Citi Economic Surprise Index is up to -15.50 from a low of -61.60 in September. In other words, while economists are still underestimating the health and vigor of the economy, this has been by an increasingly smaller margin. A relatively rosier outcome compared to the August print may keep bond yields elevated, pressuring gold.

Check out the DailyFX Economic Calendar for more key events!

On the 4-hour chart, gold prices have been consolidating between the 1769 – 1766 and 1740 – 1747 inflection zones since late September. XAU/USD appeared to break above a bullish Falling Wedge chart formation, but follow-through has been lacking. That is undermining the breakout. A push lower exposes the September low. Otherwise, a climb places the focus on the 200-period Simple Moving Average.

According to IG Client Sentiment (IGCS), about 74% of retail traders are net-long gold. Downside exposure has decreased by 5.68% and 20.23% over a daily and weekly basis respectively. We typically take a contrarian view to crowd sentiment. Since most traders are net-long, this suggests gold may continue falling. Recent shifts in positioning are further underscoring a bearish contrarian trading bias. 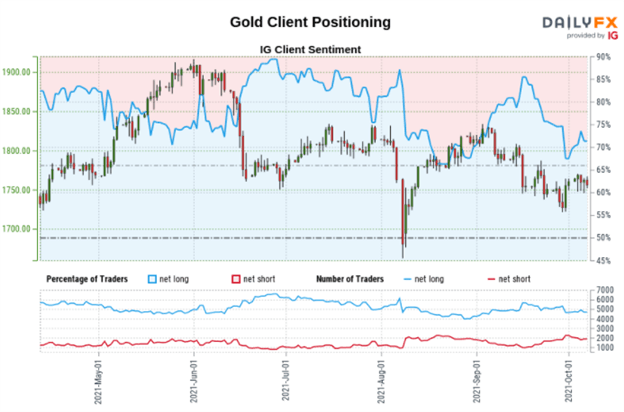