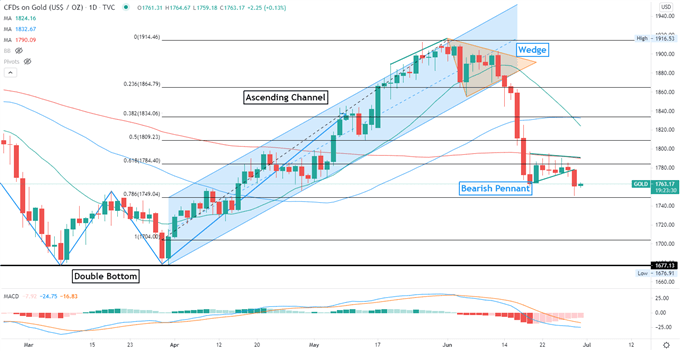 Gold prices traded modestly higher during Wednesday’s APAC session after falling almost 1% a day ago. The overall trend looks bearish-biased after prices breached the supporting trendline of a “Bearish Pennant”, opening the door for further downside potential (chart above).

Pharmaceutical company Moderna published a lab report on Tuesday which showed that its Covid-19 vaccine is effective in producing antibodies against the Delta variant – a newly found viral strain from India. The news revitalized market confidence and led the US Dollar higher, weighing on bullion prices. Yet, questions remain over the production capacity and distribution of Moderna’s vaccine around the globe as new viral strains continue to spread and mutate.

Further strengthening of the Greenback may continue to exert downward pressure on the yellow metal, which has entered a sharp correction after the Federal Reserve signaled a hawkish shift in its monetary policy at the June FOMC meeting. Traders are eyeing this Friday’s US nonfarm payrolls report for clues about the recovery of the labor market and its ramifications for the Fed’s policy guidance.

Gold Prices vs. DXY US Dollar Index – Past 12 Months

Gold has been riding the tailwind of the ultra-low interest rate environment and central banks’ quantitative easing since the onset of the Covid-19 pandemic, and thus it may be more vulnerable to a pullback when the reversal in the monetary policy trajectory begins. As a result, near-term momentum may be tilted to the downside as tapering fears weigh.

Technically, gold prices have likely formed a “Bearish Pennant”, which is a continuation chart pattern. It usually appears after a large upward or downward movement and marks a brief consolidation before prices continue to move in the direction of the dominant trend. A “Bearish Pennant” hints at further downside potential if prices breach below trendline support.

An immediate support level can be found at $1,750 – the 78.6% Fibonacci retracement. The MACD indicator formed a bearish crossover and trended lower, suggesting that bearish momentum is dominating.