The price of gold pushed to a fresh monthly high ($1834) as Fed Chairman Jerome Powell relayed a dovish forward guidance in front of US lawmakers, but swings in risk sentiment may influence bullion over the coming days as the Federal Reserve enters the ‘quiet period’ ahead of the interest rate decision on July 28.

The price of gold appears to be moving to the beat of its own drum as bullion no longer shows an inverse relationship with US Treasury yields, and it remains to be seen if the upcoming US data prints will influence the precious metal as the economic docket remains fairly light for the week ahead. 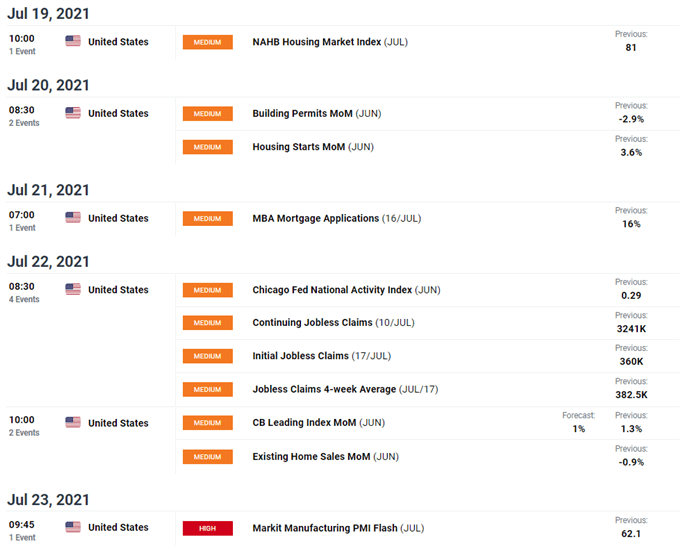 The slew of US housing data may do little to sway the Federal Open Market Committee (FOMC) as the minutes from the June meeting emphasized that the “the Committee’s standard of ‘substantial further progress’ was generally seen as not having yet been met,” and it seems as though the central bank will retain the current course for monetary policy as “participants agreed to continue assessing the economy’s progress toward the Committee’s goals and to begin to discuss their plans for adjusting the path and composition of asset purchases.”

The wait-and-see approach for monetary policy may keep the price of gold afloat as Chairman Powell and Co. brace for a transitory rise in inflation, but a growing number of Fed officials may change their tone over the coming months as St. Louis Fed President James Bullard, who votes on the FOMC in 2022, insists that “it’s time to end these emergency measures.”

With that said, the price of gold may continue to move to the beat of its own drum as the looming US data prints are likely to have a limited impact on the monetary policy outlook, and swings in risk sentiment may influence bullion ahead of the next Fed rate decision as the central bank enters the blackout period.