Gold prices snapped a four-week losing trend, managing to close on a high note after touching the lowest level since January. A rebound in the back half of last week was spurred on by recession fears amid worries that runaway inflation is eroding the most important engine of economic growth: household consumption.

Guidance from retail giant Target offered what was perhaps the most eye-catching headline stoking the narrative. It highlighted that rising prices are driving down demand, and said it would have to give up some of its margins to help insulate consumers from elevated input costs and keep them coming in.

That retail-level demand destruction is already underway is doubly worrying because the Federal Reserve is still in the early stages of an ambitious tightening cycle meant to bring price growth to heel. It has hiked rates by 50 basis points (bps) already and markets expect a further 200bps by the end of the year.

That will almost certainly cool growth further. Indeed, Fed Chair Jerome Powell reiterated that beating inflation is the US central bank’s top priority last week. He acknowledged that doing so may push interest rates above the ‘neutral’ level where they begin to crimp growth and said a rise in the jobless rate may be in the cards. 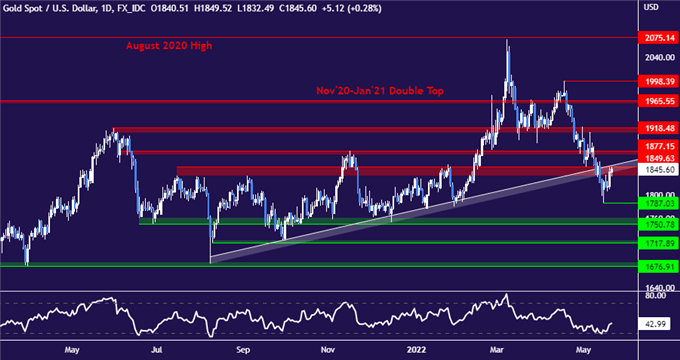 Gold was able to capitalize on this story because it offers no yield to its owners. Markets translated recession fears into a cooler outlook for interest rates, which helped boost bullion’s relative appeal. The yield curve broadly flattened, with slight inversion at the long end (the 5- and 10-year Treasuries spread).

GOLD SELLOFF MAY RESUME AS TOP CENTRAL BANKERS SOUND OFF

The yellow metal may find last week’s fortunes fleeting, however. While incoming PMI data from the world’s top economies will probably reflect a broad-based slowdown, a steady stream of commentary from top central bankers is likely to reassert beating inflation policymakers’ priority.

The Fed will release minutes from the latest FOMC meeting and a host of officials including Chair Powell are due to speak. Comments from ECB President Lagarde and BOJ Governor Kuroda are also on tap. The RBNZ is set to raise rates by a further 50bps, and Governor Orr will hold a press conference thereafter.