Inflation continues to garner attention as policy normalization takes effect in the UK, with a 100% probability of a 25 basis point hike (0.25%) anticipated for March via rates markets. However, Wednesday’s CPI print is forecasted to be 5.4% – the same as the month before – and could provide dovish members of the BoE with a reason to calm lofty rate hiking expectations.

Essentially, a higher than expected CPI figure fits the current narrative and is unlikely to affect the Pound in any material way. Conversely, a print in line or lower than expectations could see the Pound trade lower as market participants re-evaluate the pace and duration of future rate hikes. In addition, the US dollar is likely to remain supported as long as the situation in Ukraine continues without a peaceful resolution.

The latest sentiment data from the Commitment of Traders (CoT) report reveals continued divergence between reported GBP longs and shorts as the cumulative net-short positioning increases.

Essentially, hedge funds and large speculators could be positioning themselves for a decline in Sterling ahead of the UK inflation data on Wednesday. 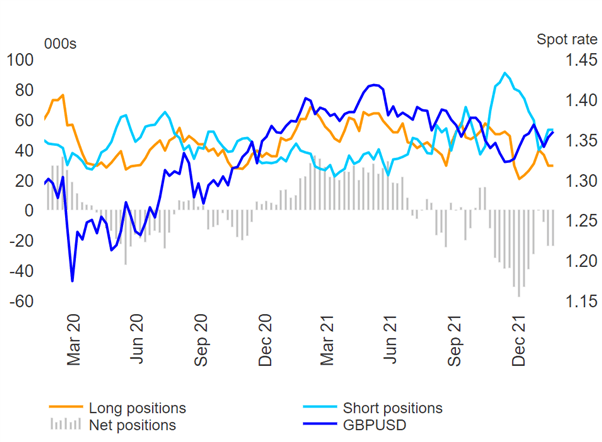 Source: Refinitive via CFTC data compiled from the CoT report

The last fortnight of trading saw GBP/USD largely trade between 1.3515 and 1.3600 (opening and closing levels) however, today’s early price action reveals a move lower could be on the cards.

Price action failed to trade and hold above the 200 day simple moving average (SMA) and recently broke below 1.3515. Bear in mind that the IG chart makes use of a Sunday candle meaning the SMA varies slightly form chart packages not showing Sundays. A further bearish signal appears in the form of a bearish crossover as the 20 SMA looks on the verge of crossing below the 50 SMA. Keep an eye on today’s close.

A close and hold below 1.3515 with a confirmed bearish crossover brings 1.3470 and 1.3410/00 into focus as the most relevant levels of support; while a close above 1.3515 could mark the resumption of the recent sideways movement whereby resistance appears at the 1.3600 psychological level. 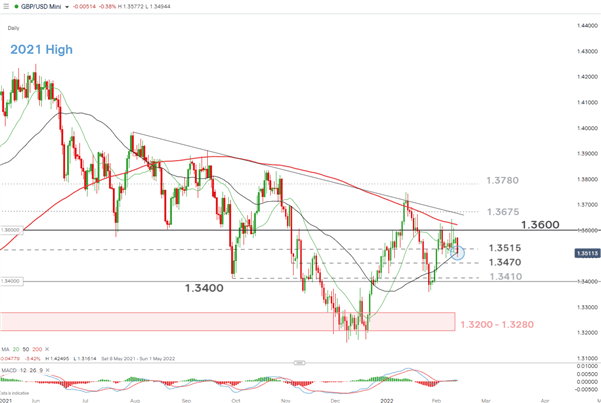