GBP/JPY is currently trading at its highest level since the spring of 2018. The pair began to trend upwards in late September. The Brexit agreement reached between the EU and the UK in late December triggered volatility in the pair, but has since provided a tailwind to the Pound.

While Brexit-related uncertainties remain high, the conclusion of an initial deal was enough to drive the pair back above the 140.00 level for the first time since early September. Since breaking that level, the pair hasn’t looked back, rising steadily throughout 2021 to currently trade around the 152.00 level. 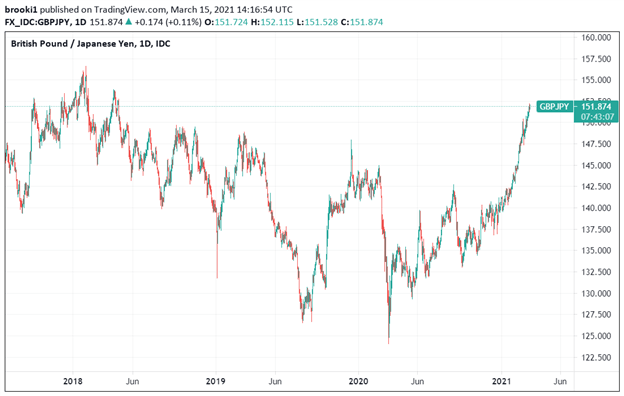 While the pair has performed strongly, further gains may be less likely. The GBP/JPY rally hit a bump in late February as bond yields spiked higher, sending the pair falling from above 150.00 to the 148.00 level.

As bond markets stabilized, the pair edged higher, hitting a fresh multi-year high around the 152.20 level on March 12th. Since then the pair has traded sideways in a tight range between 151.00 and 152.00. Further moves higher may need a catalyst on one or both sides as the momentum-driven rally looks to have nearly exhausted itself. 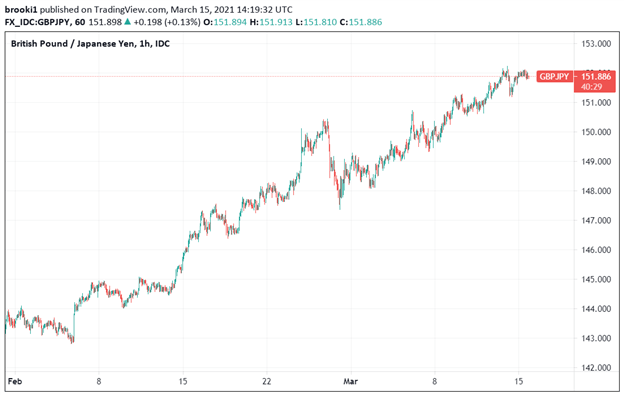 Get Your Free GBP Forecast

Like GBP/JPY, GBP/CHF has performed strongly in 2021, rising from 1.2000 to currently trade above 1.2900, its highest point in over a year. The Swiss Franc has been weakening in the new-year as the reflation trade takes hold around the world and investors shy away from safe-haven currencies. 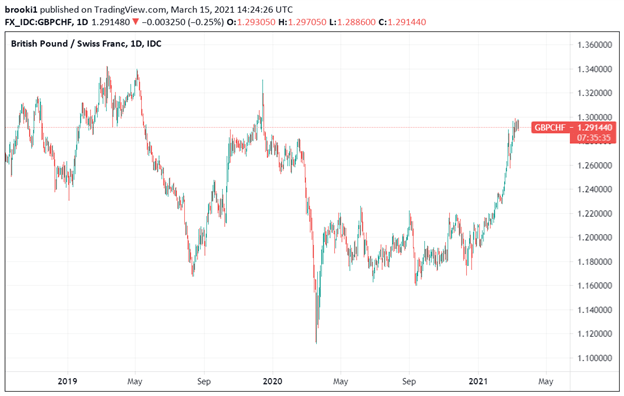 While the GBP/CHF rally has been equally as impressive as GBP/JPY, it also faces the same problem. The pair reached the 1.2900 level in early March and has consolidated there since, with any attempts higher quickly reverting back to support at 1.2900. 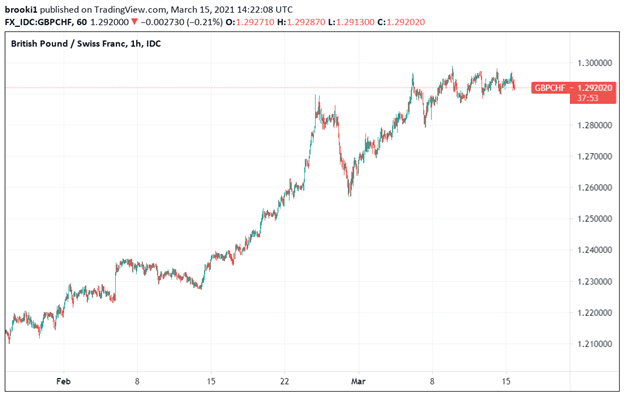 Overall, the rally in Pound Sterling seems to have reached a potential inflection point. Continued Brexit uncertainty, especially surrounding equivalence in the financials sector, may add to downside risks for the British currency.

On the other hand, the UK seems to have weathered its most recent wave of Covid and has been much more successful with its vaccination rollouts than other European nations. The upcoming rollback of restrictions may provide a further tailwind to the Pound.

Most importantly, the BoE’s March 18th policy meeting will likely be the deciding factor as to whether the Pound makes another move higher or if it begins to step back from the gains made so far this year. Markets will look for changes in the BoE’s language and policy as the central bank provides an update on their outlook for the British economy.