We are moving into the final trading week of the year and many market participants have already turned off their computers until the clock rolls over to 2023. Though we experienced some unseasonable volatility and directional skew from the major markets through December and up to the 51st week of the year, the natural curb on participation through this final week of trade carries far greater weight. That is not to suggest a sense of bearing for risk-sensitive assets, but rather a reflection of the significantly downgraded tempo potential for the markets regardless of the compass bearing they chose. In this environment, narrow chop is the steady state and breaks are very reticent to move into trends. If we were to experience an outlier event, it would most likely have to develop from the equivalent of a ‘grey swan’ or greater (a significant and global financial disruption that was considered a possible threat but not in the immediate future).

That is the backdrop of the market that we are dealing with and this is how I’m going to approach my evaluation of EURUSD. The most liquid currency pair in the world, the benchmark has found its way into a congestion that can readily be describe as ‘extreme’. The five-day historical range (as a percentage of spot) is the smallest it has generated since November of last year. Quiet is to be expected through this period, but this is on the extreme end of the spectrum despite the calendar. Activity levels are typically ‘mean reverting’ meaning they usually move to something of a norm. If there is a break of the 1.0660 to 1.0580 range, it would not likely unfold with significant follow through. The 10-day rolling ATR (realized volatility) is significantly chastened by market conditions and there isn’t much in the way of high-profile US or European event risk ahead. I will watch for a break, but I would be very skeptical about how far we could move from there. 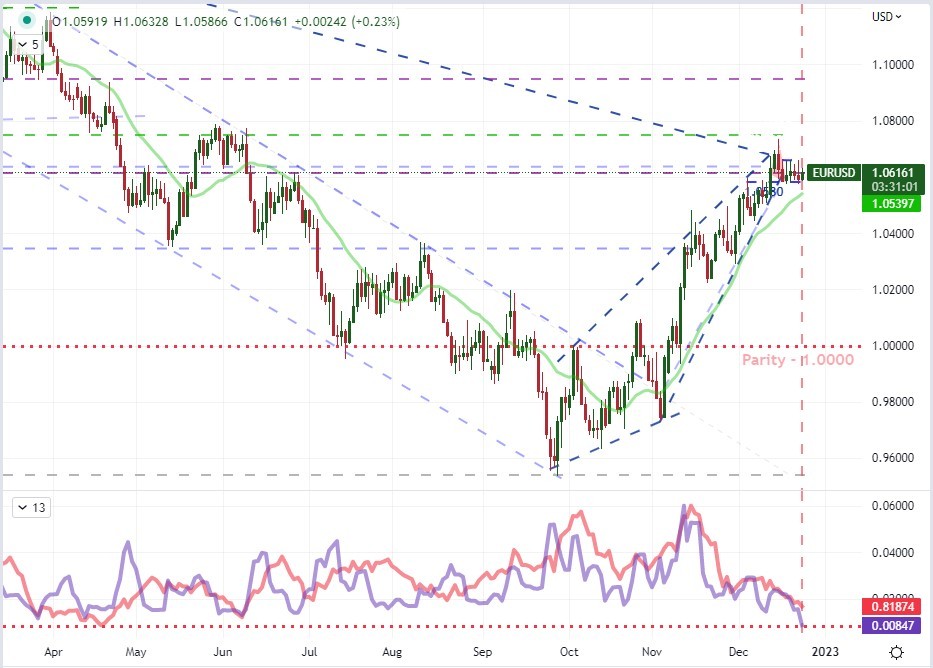 As far as scheduled fundamental event risk through the end of 2022, this past Friday’s PCE deflator was perhaps the last significant release. The Fed’s preferred inflation reading slowed from a 6.1 to 5.5 headline pace while the core reading matched expectations in a step down from 5.0 to 4.7 percent. Both are still far higher than the Fed’s target rate, but the pace of slowing mirrors that of the market’s preferred CPI reading – which prompted significant speculative charge for the S&P 500 in November and this month (at least initially). However, the market generally pays closer attention to the CPI reading and the severe lack of liquidity in the final session of Friday trade was naturally a severe curb for response. For scheduled event risk over the coming week, the weight of the US calendar will be around inventory, house inflation and pending home sales released around mid-week. Japan will be another region with fundamental heft, leveraged by the recent BOJ surprise, with BOJ summary of opinions along with a string of monthly reports (Housing starts, industrial production, unemployment and retail sales). 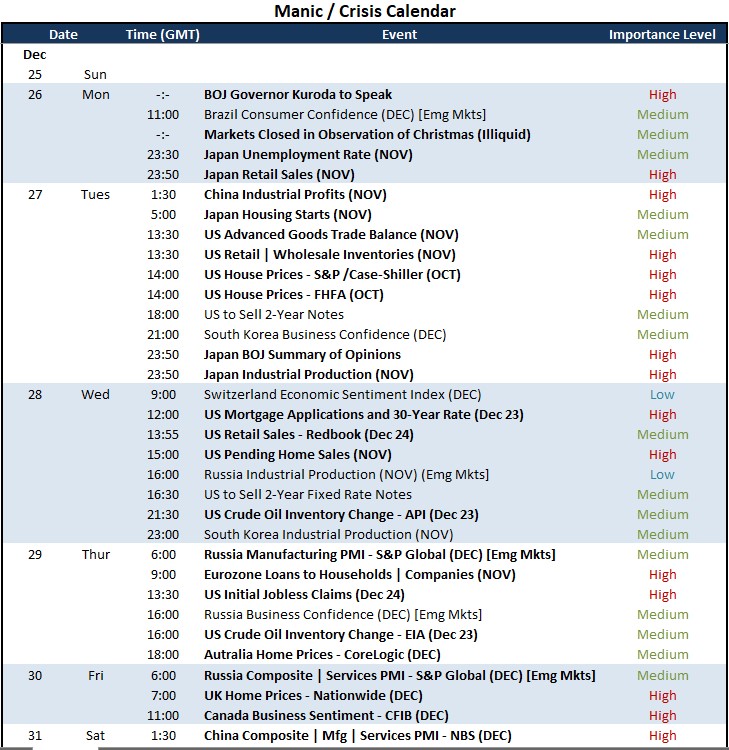 For general ‘risk trend’ development, the seasonal averages suggest that there is likely to be a substantial further drain in liquidity and volatility levels. Considering direction – where most traders focus – the historical average for the S&P 500 suggests that the final week (the 52nd) of the year results in a meaningful gain. In fact, it is the third largest of the second half of the year. However, the range of historical performance for this particular week through history is broad. Just to put it into perspective, this past week registered a modest loss when historically it has averaged a 0.3 percent gain. Direction is far less consistent than the volatility and certainly liquidity during the period. 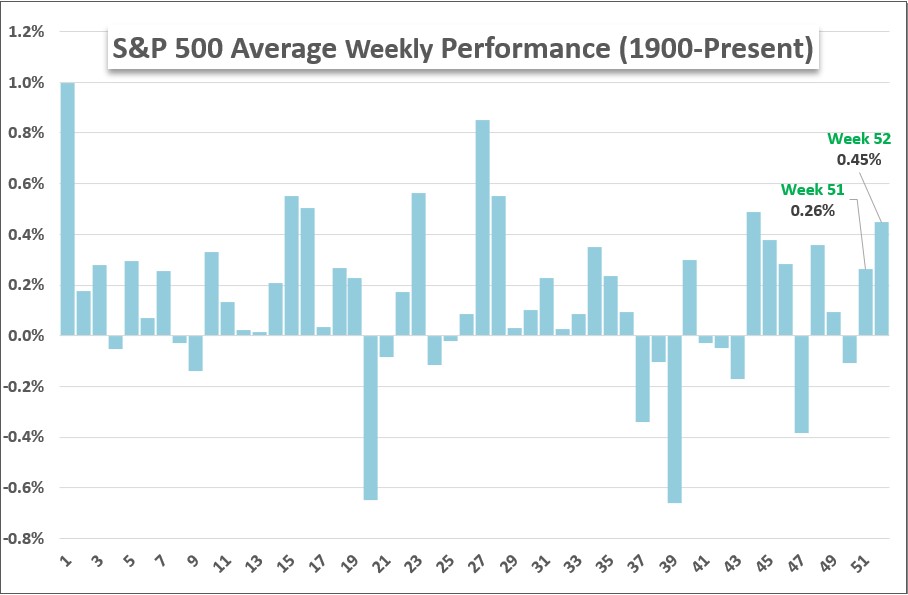 Considering the general direction of the market is unpredictable while liquidity conditions are more reliably drained moving forward with a possible amplification of volatility, I will be watching the S&P 500 test the bounds of its past week’s range. There is meaningful resistance above in the 3,910-25 area blocked out by the 100-day SMA to the range of former lows in November and early December. Lower, we have 3,820-00 formed by a confluence of significant Fibonacci levels. We ended this past week in the middle of this range, but liquidity-amplified volatility could see potentially multiple swings to the borders of this band. 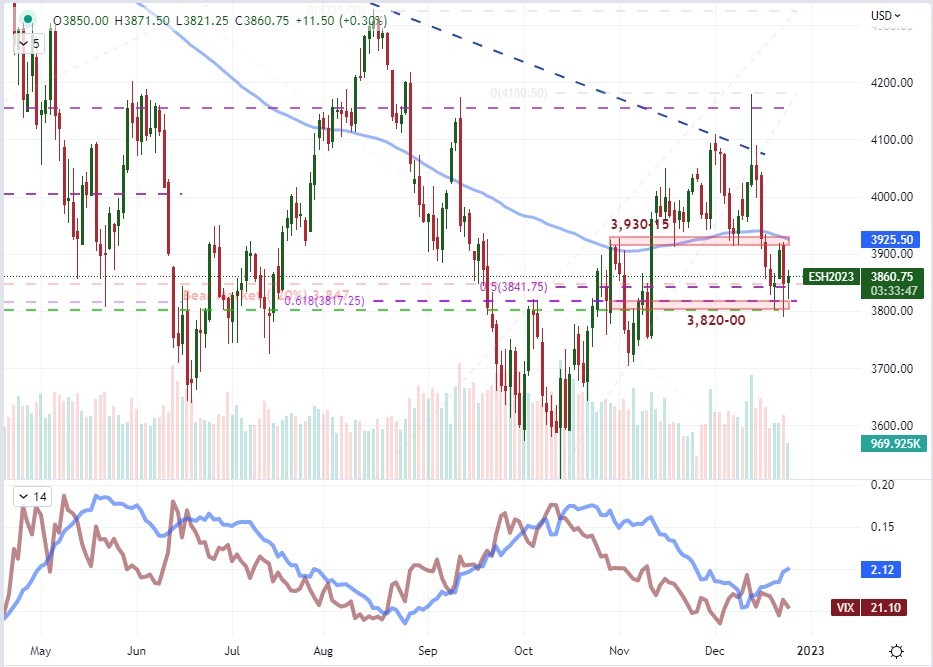 Discover what kind of forex trader you are