The Euro is moving in on a big support zone against the US Dollar, helped along by last week’s spurt of strength in the Greenback. This zone of support runs between a couple of longer-term Fibonacci levels and this is the same area that caught the low at the end of Q1, plotted from 1.1709-1.1736.

The big focus for this week is on US inflation as traders look for signs as to whether the Fed may be moving forward on tapering asset purchases ahead of the end of the year. This became a hot button topic last week when FOMC Vice Chair, Richard Clarida, mentioned as such on Wednesday. That elicited a strong push in the US that furthered on Friday upon the release of July Non-farm Payrolls, which printed in a very strong manner.

It’s rational to expect EUR/USD performance around this support zone to be at least somewhat guided by that Wednesday inflation release. With another strong print, the USD could challenge its four-month-high, after which the 2021 high comes into view. Such moves appear as though they’d come along with a support zone break in EUR/USD at this really critical area on the chart.

To learn more about how CPI (Inflation) impacts prices, check out DailyFX Education

EUR/USD: Retail Betting on a Hold – Will That Lead to a Break?

As EUR/USD has pushed down towards this big zone of resistance, retail traders have continued to hit the bid in apparent anticipation of a support hold. As of this writing, more than 65% of retail traders in the pair are holding net long positions.

As we teach in DailyFX Education, IGCS is often followed as a contrarian signal; so building long positions from retail as prices near support would allude to the potential for bearish breakdown potential.

To learn more about trading with IG Client Sentiment, check out DailyFX Education 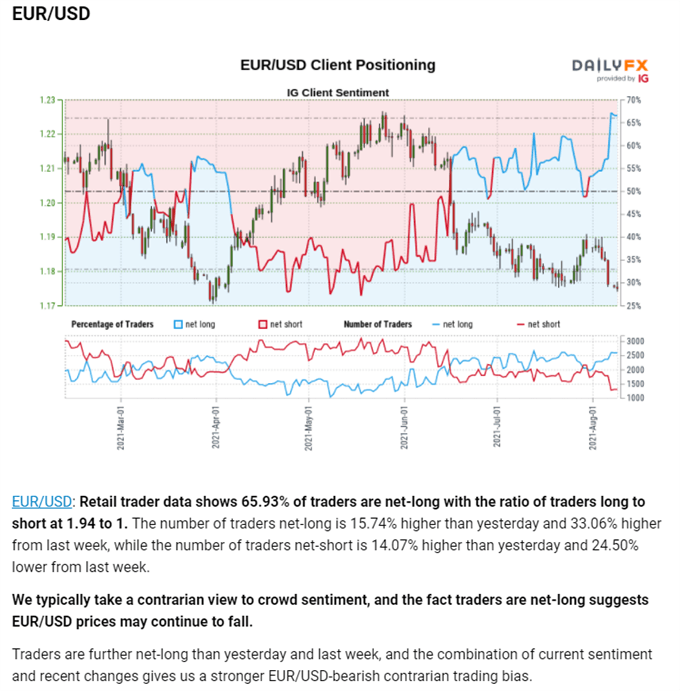 Similar to EUR/USD above, EUR/JPY has been in the midst of a bearish backdrop while testing a really big zone of support. The difference here is EUR/JPY has been probing this support zone for a few weeks now while the EUR/USD support test is just now starting to go down.

In EUR/JPY, the support zone at play runs from 128.52-129.47. The latter of those prices is the 50% marker of the 2000-2008 major move while the former price is the 38.2% Fibonacci retracement of the 2012-2014 major move. Prices plunged into this zone in late-July before bouncing back above the 130.00 psychological level. But bulls couldn’t hold the move and sellers came back for another probe into support.

At this point, there’s been a continued hold in this zone and it hasn’t yet given way. But, there’s also a descending trendline sitting overhead, keeping the door open for breakdown potential in the pair.

To learn more about Fibonacci or trendlines, check out DailyFX Education

In stark contrast to the two setups above, EUR/AUD actually looks somewhat bullish. And this has been the case since the pair bottomed ahead of the March open, after which buyers staged an incline of more than 900 pips.

At this point, the 1.6000 psychological level appears to be the stumbling block and buyers have so far had difficulty in holding the pair above. But, the sequencing of higher-highs and higher-lows has continued, and if prices can stick above the prior higher-low of 1.5935, the door can remain open to bullish scenarios in the pair.

To learn more about psychological levels, check out DailyFX Education

Ok back to bearish with EUR/GBP: The pair pushed down to another fresh yearly low this morning, and this comes after last week saw a decisive push-off from a zone of prior support-turned-resistance. The complication at this point appears to be the challenge of chasing the normally sleepy pair as it sits at this new lows, but a pullback to the .8500 handle may open that door for lower-high resistance. The psychological level helped to elicit a couple of support bumps in mid and late-July, and with prices trading through there last week and holding today, that prior short-term support looms ominously overhead and this as an area that sellers can use to test the potential for trend continuation.