EUR/USD appears to be staging another attempt to test the former support zone around the May low (1.0349) as it retraces the decline from earlier this week, but the US Non-Farm Payrolls (NFP) report may influence the exchange rate as the update is anticipated to show a further improvement in the labor market.

EUR/USD is little changed from the start of the month as it extends the rebound from the weekly low (1.0123), and the exchange rate may stage a larger advance over the coming days if it manages to break out of the opening range for August.

However, the update to the US NFP report may undermine the recent advance in EUR/USD as the economy is anticipated to add 250K jobs in July, and evidence of a robust labor market may generate a bullish reaction in the Greenback as it raises the Federal Reserve’s scope to implement a highly restrictive policy.

As a result, the Federal Open Market Committee (FOMC) may stick to its current approach in combating inflation as Chairman Jerome Powell acknowledges that “another unusually large increase could be appropriate at our next meeting,” but a dismal development may push the central bank to adjust the forward guidance for monetary policy as the US Gross Domestic Product (GDP) report warns of a recession.

In turn, fresh data prints coming out of the US may sway EUR/USD ahead of the next FOMC interest rate decision on September 21 as Chairman Powell recognizes that “it likely will become appropriate to slow the pace of increases while we assess how our cumulative policy adjustments are affecting the economy and inflation,” but the tilt in retail sentiment looks poised to persist as traders have been net-long the pair for most of the year. 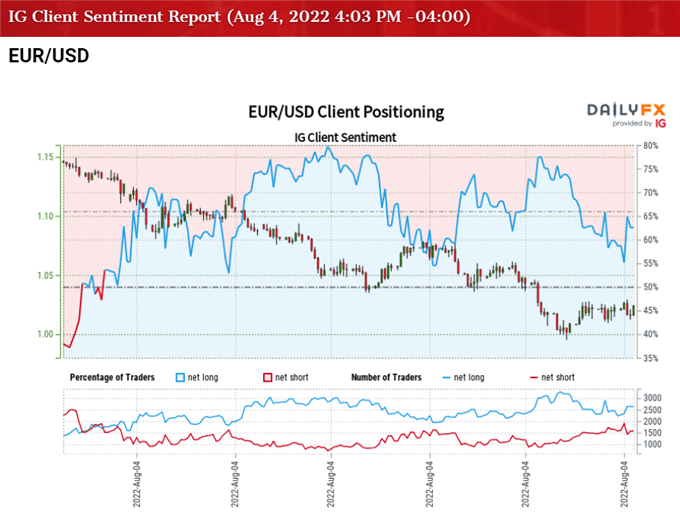 The IG Client Sentiment report shows 55.90% of traders are currently net-long EUR/USD, with the ratio of traders long to short standing at 1.27 to 1.

With that said, EUR/USD may stage another attempt to test the former support zone around the May low (1.0349) as it retraces the decline from earlier this week, but a further improvement in the US labor market may undermine the recent advance in the exchange rate as the Fed plans to carry out a restrictive policy. 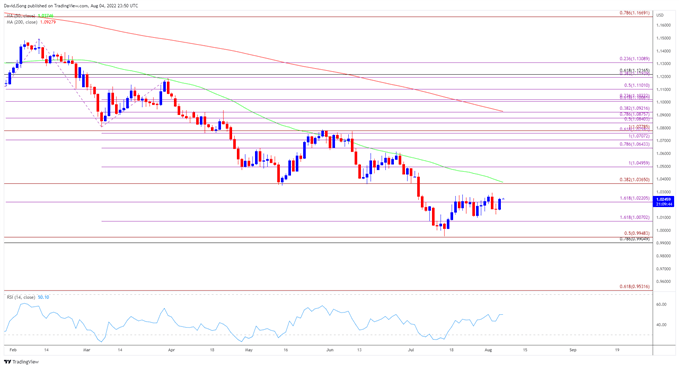