The US dollar rose against its peers in early trade in the London session and in particular, in the EUR/USD. Markets have communicated doubts about the speed of the economic recovery as the Eurozone witnessed a contraction in GDP over the last two successive quarters.

The recent changes to the ECB’s inflation target of 2%, with overshoots allowed, further entrenches the ultra-dovish nature of the ECB. This comes at a time when members of other central banks – mainly the Fed and BoE – have already brought up the topic of tapering in some way or another, which stokes expectations of future interest rate increases in those locations. However, the ECB remains committed to creating a supportive environment to aid the recovery of the economic zone and warns against tightening too soon.

The daily chart shows recent price action as it temporarily broke below the long-term trendline acting as support since November 2020.

Bears will be eyeing at a break and hold below the long and short-term trendlines as the area of confluence represents a credible zone of support. Levels of support are at the April low (1.1700) and then around the 50% Fib level (drawn from the 2018 high to the March 2020 low) at 1.1600.

However, the appearance of positive divergence on the RSI presents the possibility of a potential reversal from here. Bulls will be watching for a bounce off the long-term trendline followed by upward momentum. Resistance comes in at the recent lower high of 1.1880, then 1.1940 before the psychological level of 1.2000. 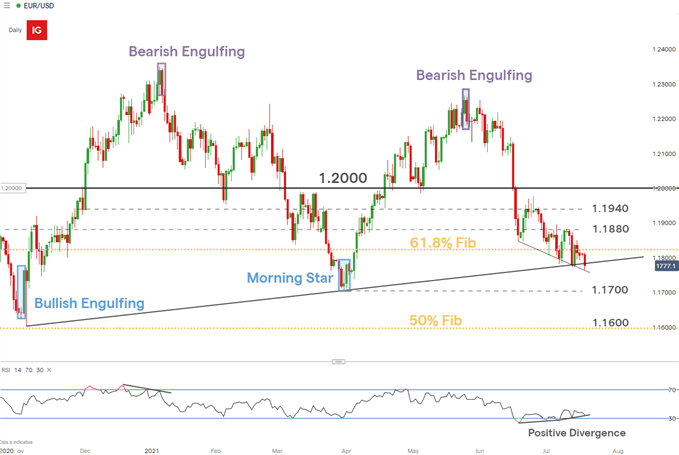 Trading Education: Be on the lookout for price action that may indicate a potential reversal is near. Previous inflections points were marked by bearish engulfings, a bullish engulfing and the morning star candlestick pattern. Learn more about these and other candlestick formations via our comprehensive education library.