EUR/USD trades to a fresh monthly low (1.1235) as the Federal Reserve unveils a more detailed exit strategy, and the exchange rate may attempt to test the 2021 low (1.1186) as it extends the series of lower highs and lows from the start of the week.

EUR/USD snapped the opening range for January earlier this week on the back of US Dollar strength, and the Greenback may continue to outperform against its European counterpart as the Federal Open Market Committee (FOMC) “expects that reducing the size of the Federal Reserve’s balance sheet will commence after the process of increasing the target range for the federal funds rate has begun.”

The comments suggests the FOMC will implement higher interest rates while unloading the balance sheet in 2022 as “the economy no longer needs sustained high levels of monetary policy support,” and the diverging paths between the Fed and European Central Bank (ECB) may keep EUR/USD under pressure as President Christine Lagarde and Co. appears to be in no rush to normalize monetary policy. 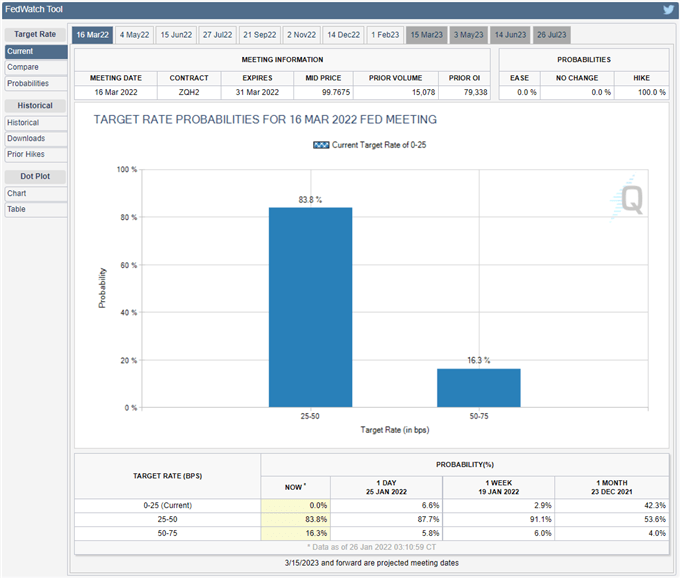 As a result, the advance from the 2021 low (1.1186) may turn out to be a correction in the broader trend as the CME’s FedWatch Tool now reflects a 100% change for at least a 25bp rate hike, and the exchange rate may continue to depreciate ahead of the next ECB meeting on February 8 as the Governing Council carries out “a step-by-step reduction in the pace of our net asset purchases, moving gradually from around €80 billion per month to €20 billion per month over the course of 2022.”

It remains to be seen if the ECB will adjust the forward guidance over the coming months as President Christine Lagarde insists that “monetary accommodation is still needed for inflation to settle at 2% over the medium term” while speaking at the Conference of Parliamentary Committees for Union Affairs of the Parliaments of the European Union (COSAC), but further weakness in EUR/USD may fuel the recent flip in retail sentiment like the behavior seen during the previous year. 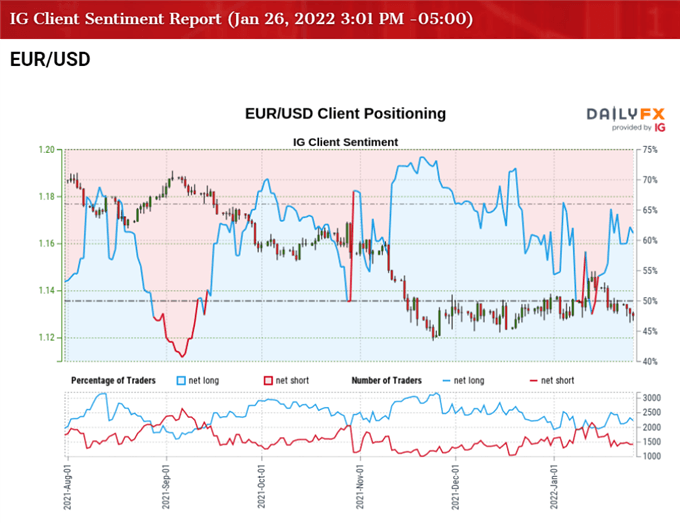 The IG Client Sentiment report shows 63.80% of traders are currently net-long EUR/USD, with the ratio of traders long to short standing at 1.76 to 1.

With that said, the diverging paths between the ECB and FOMC may keep EUR/USD under pressure as Chairman Jerome Powell and Co. prepare to normalize monetary policy, and the exchange rate may attempt to test the 2021 low (1.1186) after snapping the opening range for January as it extends the series of lower highs and lows from the start of the week.