With nothing substantial on the economic calendar today, we look ahead with anticipation to U.S. and Euro zone inflation data (see economic calendar below). With forecasts markedly higher for both regions, we may see further appreciation for the dollar and Euro respectively. This being said, with inflationary pressure mounting in the Euro zone due to the war in Ukraine, markets have been pricing in this higher figure for some time. I think a release in line with expectations may see a muted reaction in terms of Euro upside with a miss resulting in significant downside.

From the U.S. perspective, Non-Farm Payrolls (NFP) will follow on Friday with some projecting figures higher than the 475K forecast. This will further reinforce the tight labour market within the U.S. and give provision to the aggressive Fed tightening outlook, leaving the door open for a softer Euro. 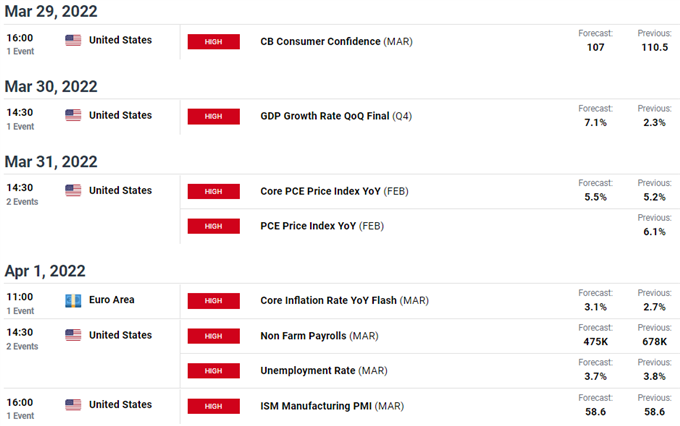 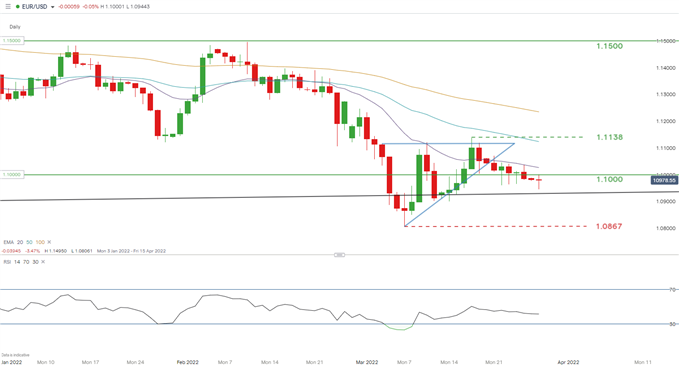 After barely holding above the 1.1000 psychological support level last week, EUR/USD bears have slipped lower on Monday continuing the ascending triangle pattern (blue) breakout as mentioned in my previous analysis.

Price action now heads towards the key area of confluence at the long-term triangle support zone (black) which has held since 2016. A confirmed weekly candle close below could mark the beginning of a significantly weaker Euro.

IGCS shows retail traders are currently LONG on EUR/USD, with 65% of traders currently holding long positions (as of this writing). At DailyFX we typically take a contrarian view to crowd sentiment however, recent changes in long and short positions have resulted in a mixed bias.