The Euro has gained traction post-FOMC at the surprise of many as the Fed’s comparatively hawkish narrative deviated from the more cautious ECB. This can be attributed largely to markets largely pricing in an aggressive Fed tightening cycle leaving little room for dollar strength. With investors extremely wary around the Euro, any slight positivity sourcing from the war in Ukraine, dollar weakness and ECB hawkishness have been propelling EUR/USD bids.

Yesterday, ECB officials Schnabel and Villeroy both voiced their concerns around inflationary pressure from unstable energy prices. The CPI print met expectations, emphasizing the entrenched nature of inflation within the Euro zone. Although increasing interest rates may not be the answer, markets saw this in a bullish light. The ECB President Christine Lagarde further toned down rate hike expectations after echoing her prior sentiments around a gradual rate path which will only come into effect after “some time”. 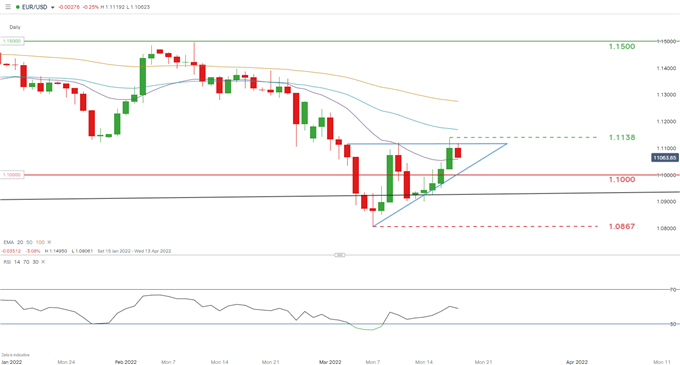 Current prices are testing triangle resistance but the more likely outcome would be a break below support, bringing into consideration subsequent support levels.

IGCS shows retail traders are currently LONG on EUR/USD, with 56% of traders currently holding long positions (as of this writing). At DailyFX we typically take a contrarian view to crowd sentiment however, recent changes in long and short positions have resulted in a bullish bias.