The Euro is moving slightly lower against the Greenback through Asia-Pacific trading, as markets embrace the risk-on bounce from overnight when Russia reportedly pulled some military units away from the Ukrainian border. Although the troop movements weren’t verified by the United States, Market participants cheered the news and bought the Euro versus most major pairs. EUR/USD gained 0.44% overnight, while EUR/JPY rose over 0.50%.

Traders have turned positive on the Euro recently, brought on by the European Central Bank’s (ECB) hawkish shift earlier this month when inflation hit the highest levels since the Euro started trading. Overnight index swaps (OIS) are pricing in over 50 basis points of tightening by the December 2022 policy meeting.

The next policy decision is due out in March when central bank watchers expect ECB President Christine Lagarde to provide a bit more clarity on the path to a rate hike. An update to the economic forecasts for the central bank will also provide new data for traders to mull over. The possibility for guidance on reducing the balance sheet is also on the table. ECB member Klaas Knot earlier this week stated that he sees a 25 bps rate liftoff later this year, citing high inflation that is already well above target.

A final update to the January consumer price index (CPI) will cross the wires next week. Industrial production data due out today is seen at -0.5% y/y for December. That would mark an improvement from November’s 1.5% drop. ECB board members Isabel Schnabel and Philip Lane will speak later this week. Ms. Schnabel – a policy hawk – has expressed willingness to reduce the pace of bond buying. A slate of Fed speakers are also on tap this week.

EUR/USD is trading between its 50- and 100-day Simple Moving Averages (SMA) after prices rose above former trendline support. Euro bulls will look to bring prices back above the falling 100-day SMA, which would open a possible path to test the 2022 high at 1.1494. Alternatively, slipping lower would see bears attempt to pierce below the 50-day SMA. 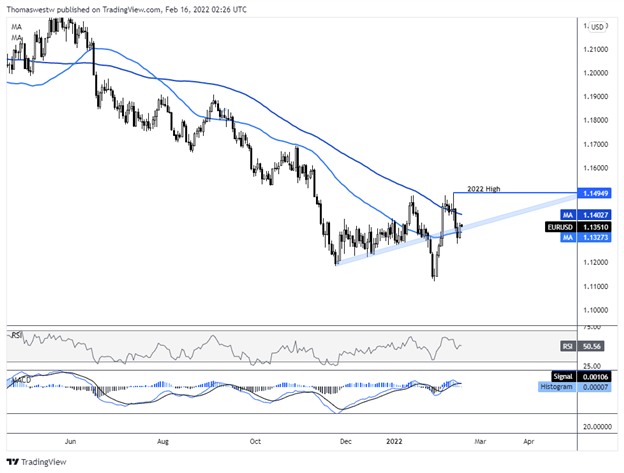