EUR/CHF: The cross currently trades at its lowest level since May 2020 following the firm break below the 1.06 handle. As such, given that EUR/CHF is not far off the line in the sand at 1.05, where the Bank intervened aggressively during the height of the Covid crisis. It is likely that the SNB will step up interventions to slow the appreciation in the Franc. Yesterday’s sight deposits data provided evidence of an increase in FX intervention as they grew by CHF 1.8bln. However, while this is the largest uptick since May 2021, this pales in comparison to the intervention during March-April 2020. At the same time, this notion that the Swiss Franc is an inflation hedge has provided a tailwind for the currency, which in turn suggests that EUR/CHF rallies may struggle to maintain a foothold above 1.0650. On the technical front, the daily RSI shows the cross is deeply oversold and thus chasing the move lower from current levels is unattractive. 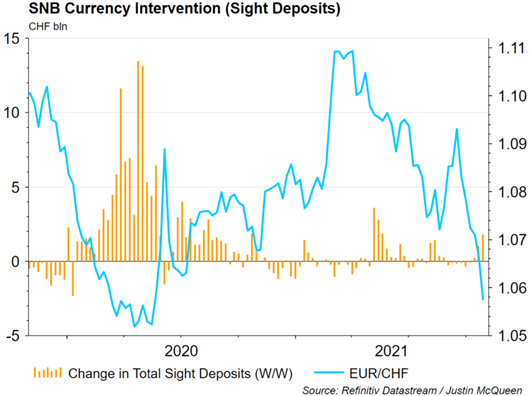 We typically take a contrarian view to crowd sentiment, and the fact traders are net-long suggests EUR/CHF prices may continue to fall.

Yet traders are less net-long than yesterday and compared with last week. Recent changes in sentiment warn that the current EUR/CHF price trend may soon reverse higher despite the fact traders remain net-long.

EUR/GBP: While the UK/France fishing row continues, tensions did ease slighty after French President Macron stepped back from his threat to impose retaliatory measures on the UK. However, despite this, EUR/GBP has continued to grind higher with the cross testing the 0.8500 handle. It also remains the case that the British fishing vessel seized in France remains held at the Port of Le Havre at least until the hearing tomorrow and thus there remains a risk that tensions can take a turn for the worse. That said, further gains will be harder to come by with topside resistance in the form of the 50 (0.8524) and 100DMA (0.8536) ahead. 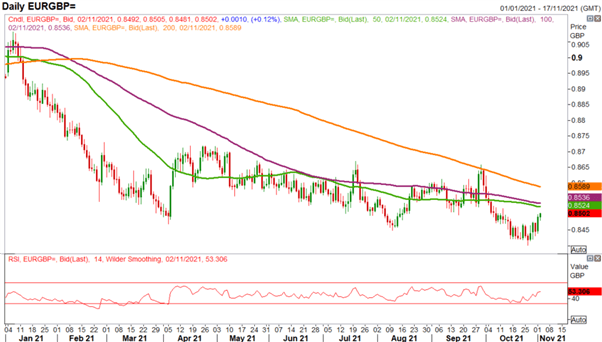