The three bodies involved in negotiating European Union rules on Bitcoin and other cryptocurrencies hope to wind up work on the Markets in Crypto-Assets legislation by the end of June as pressure increases to protect investors in an imploding market.

The EU’s clunky legislative machinery entails a “trilogue” between the European Commission, the European Parliament, and the 27 member states. Negotiators met in mid-June and plan to meet again June 30 to get the package done by the end of France’s six-month rotation in the presidency, according to a report by Bloomberg.

Among other things, negotiators still need to resolve whether to include non-fungible tokens (NFTs) in the legislation and whether to require crypto-asset service providers to disclose energy consumption, because of the massive computing power needed for mining and transactions.

The EU started work on MiCA in 2020 in an effort to set common rules on crypto for the bloc. As it has on privacy issues and high tech, the EU would like to take the lead globally in regulating digital assets.

European Commissioner Mairead McGuinness called on all parties last Friday to reach a compromise on the rules and finish them up. The crash of the Terra stablecoin in May, the halt of withdrawals by the Celsius Network, and concerns that Russia is using crypto assets to evade sanctions have made the rules more urgent, she said.

Celsius Network says the global sell-off of crypto assets make it a challenge to normalize its operations, warning it will take some time. Babel Finance, a crypto lender in Hong Kong, has also suspended withdrawals and redemptions because of liquidity issues, and Hong Kong crypto exchange Hoo halted transactions as withdrawals drained its funds.

Verena Ross, the head of the European Securities and Markets Authority, last month called for the work on crypto rules to be completed, saying she was waiting with “great impatience” for the parties to come to an agreement.

Crypto firms are scrambling to hire compliance officers as regulators prepare new rules or figure out ways to apply existing rules to digital assets. The firms are coming to realize that not only are rules inevitable, they could help keep the industry in a set of guardrails.

In the US, the Securities and Exchange Commission has dropped the ball on crypto regulation, according to commissioner Hester Peirce, who says the failure to adopt rules keeps her up at night.

“We’re not allowing innovation to develop and experimentation to happen in a healthy way, and there are long-term consequences of that failure,” Peirce said to CNBC at a blockchain summit at the end of May.

Bitcoin, the premier speculative cryptocurrency, has dipped below $20,000 for the first time since November 2020, leaving investors vulnerable and regulators worried not only about protecting them but preserving financial stability and preventing financial crime. 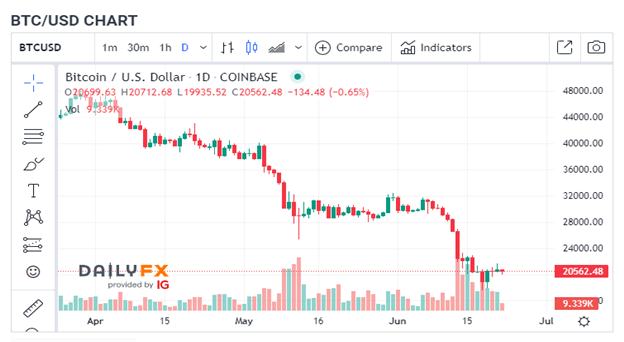 Fabio Panetta, an executive board member of the European Central Bank, warned last month that the crypto market now is bigger than the $1.3 trillion subprime mortgage market was when it set off the 2008 financial crisis.

One of the most sophisticated European regulators, the UK’s Financial Conduct Authority, is waiting on legislation expanding its supervision of crypto firms beyond money laundering. So far it has found only 33 firms it is willing to authorize.