A volatile first quarter for US equities, which grappled with not only an inflation-fighting Federal Reserve but also increased geopolitical tensions. The latter stemming from Russia’s invasion of Ukraine. Subsequently, the S&P 500 has posted a quarterly loss of circa 5%, while the market mentality has shifted from a “buy the dip bias” to a “sell the rip”. Closing out Q1, much of the factors that plagued equity markets will remain the key drivers in Q2. What’s more, in light of the increased geopolitical tensions prompting a significant bid in energy markets, with oil firmly above $100/bbl, alongside Chinese induced supply disruptions, upside risks will remain for inflation. As such, an already vigilant Federal Reserve in fighting inflation pressures, look to add more haste in containing those upside risks and bringing rates to neutral as quickly as possible. This spells another tough period ahead for risk appetite in which the bias remains a sell on rips. That said, my view remains that the biggest risk for equity markets will continue to be Fed policy. 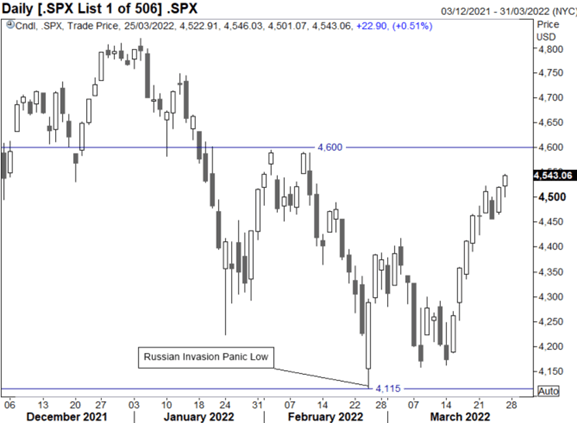 On the downside, the key area in focus is 4100, which marks the panic on the day of Russia’s invasion. Should this area be breached, there is a risk of a move 3800. However, while I expect 4100 to hold, that is largely on the premise that there is not a breakdown in peace talks between Russia and Ukraine. Meanwhile, topside resistance is situated at 4600, where the February double top is situated.