The Dow Jones and S&P 500 are on course for the best month this year so far. But, before you get too excited, it has been a dismal year for equities. Despite this, retail traders have remained predominantly bullish, perhaps eager to anticipate the turning point.

IG Client Sentiment (IGCS) is a tool you can you to gauge retail trader positioning. It also tends to function as a contrarian indicator. Now, it seems traders are increasingly turning bearish on Wall Street. Is this a sign of more gains to come from stocks? To learn more, check out the webinar recording above.

The IGCS gauge shows that about 45% of retail traders are long the Dow Jones. Since the majority of investors are now short, this suggests that prices may continue rising. Downside exposure has increased by 11.43% and 15.54% compared to yesterday and last week respectively. Due to these developments in positioning, the data is offering a stronger bullish contrarian trading bias. 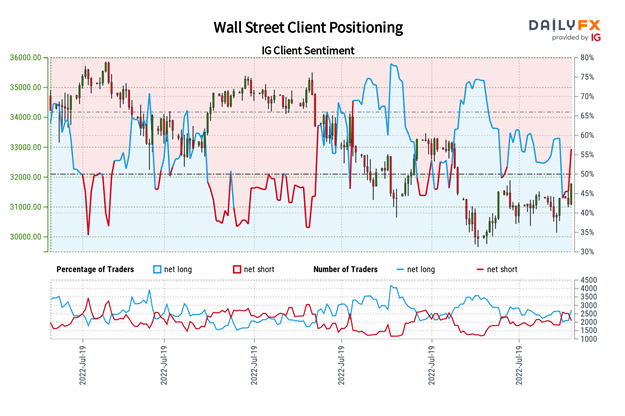 On the daily chart, the Dow Jones appears to be carving out an Ascending Triangle chart formation. The ceiling seems to be capped around 31888, with rising support from June acting as the floor. A confirmatory breakout above the ceiling could open the door to extending gains towards the 100-day Simple Moving Average (SMA). Beyond that sits the 33169 – 3434 resistance zone. Downtrend resumption entails a push under the 29552 – 29869 support zone which is made up of the February 2021 low. 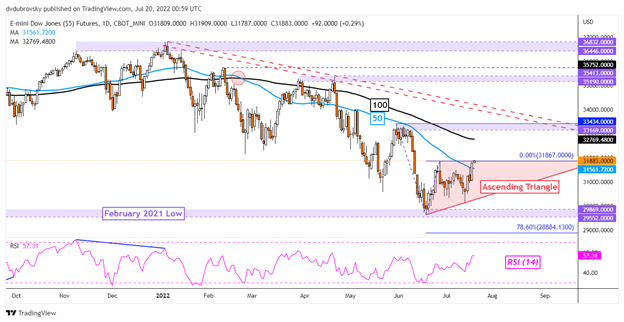 The IGCS gauge shows that roughly 52% of retail traders are net-long the S&P 500. Since most of them are still biased to the upside, albeit only slightly, this hints prices may continue falling. However, downside exposure has increased by 0.63% and 13.15% compared to yesterday and last week respectively. With that in mind, overall positioning seems to hint that the price trend may soon reverse higher even though most investors are long. 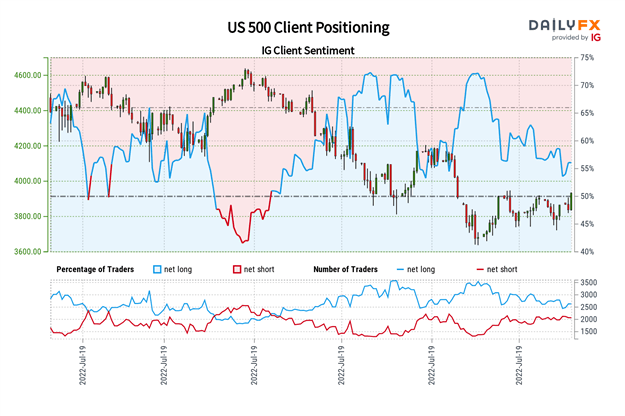 The S&P 500 also seems to be carving out an Ascending Triangle chart formation. The ceiling is around 3950, with rising support from June making the floor. A breakout above the former could open the door to extending gains, placing the focus on the 100-day SMA. Beyond the latter sits the June swing high at 4202. Downtrend resumption entails clearing under the June low at 3639. 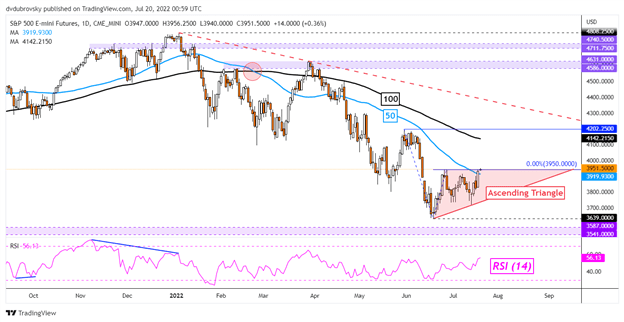