Get Your Free Oil Forecast

Crude oil made a two-week low today as markets started the new year on a nervous note with economic prospects under question amid further tightening from central banks.

Crude has steadied so far today with the WTI futures contract near US$ 76.80 bbl after making a low at US$ 76.55, while the Brent contract is a touch above US$ 82 bbl. Gold continues to inch higher after nudging US$ 1,850 an ounce overnight.

The US Dollar had a stellar North American session with the DXY index adding 1.15% for the 24-hours into the New York close. It then had an about-face and retraced much of that ground against most currencies so far today.

Wall Street ended its cash session lower to varying degrees with Tesla and Apple among the heavy hitters that tumbled. The Dow Jones, S&P 500 and Nasdaq all went lower by -0.03%, -0.40% and 0.76% respectively. Futures are pointing to muted start to their Wednesday.

Former New York Federal Reserve President William Dudley appeared to add to the uncertain outlook by saying that a Fed-induced recession is on the cards.

APAC equities have had a mixed day with Australia’s ASX 200 and Hong Kong’s Hang Seng Index (HSI) notching up solid gains while Japan’s Nikkei 225 slid lower on their first trading day of the year.

Japan’s Jibun PMI came in at 48.9 for December, slightly better than 48.8 previously.

The BoJ was buying bonds again today as they continue to maintain yield curve control (YCC) and keep a cap on yields.

The 10-year Japanese Government Bond (JGB) is trading near 0.42%, well below their maximum allowable target of 0.50%. The Yen is one of the few currencies to not make ground against the US Dollar today.

Treasury yields have continued to slide lower through the Asian session, down around 2 basis points across most of the curve.

Looking ahead, after a plethora of European CPI and PMI numbers, the US will see data on mortgages and the closely watched ISM manufacturing index.

The full economic calendar can be viewed here.

How to Trade Oil

WTI is above the 21-day simple moving average (SMA), which is currently at 76.19. A move below it would place the price below short, medium and long-term SMAs, which might suggest that bearish momentum may evolve. 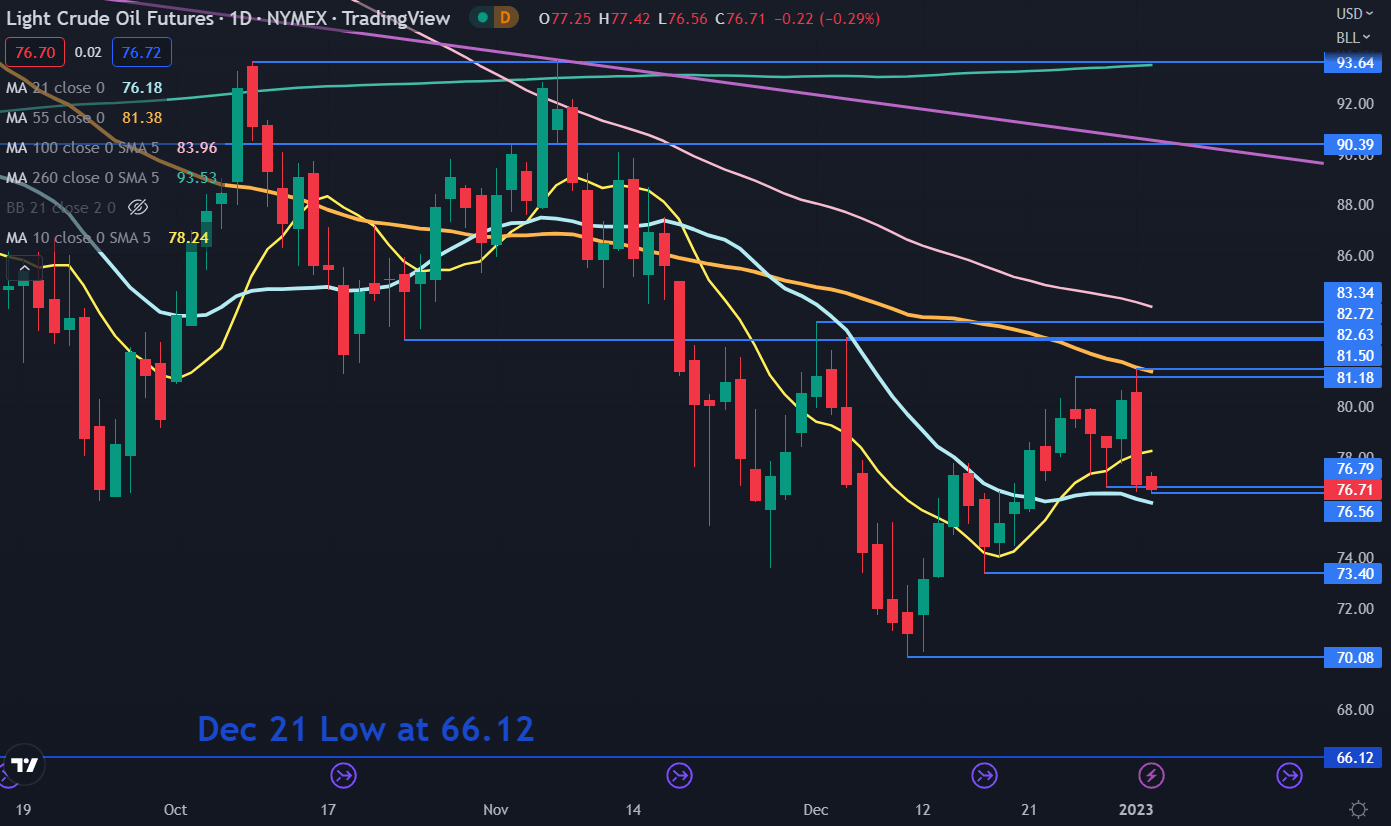