Crude Oil Reignites for Bulls As OPEC+ News Sinks In. Can WTI Make a New High?

Crude Oil Reignites for Bulls As OPEC+ News Sinks In. Can WTI Make a New High?

Crude oil continued higher today as the reality of OPEC+ not adding to production output seems to be sinking in. The market also questioned if the US Strategic Petroleum Reserve would be tapped or not. The WTI oil contract traded as high as US$ 82.47 in the Asian session.

Despite record highs for US stocks on Friday, APAC equities were mixed with Australian and Japanese stocks a bit soft while Hong Kong were slightly up. The kiwi was the best performing currency today.

In China, the communist party meets this week where it is believed that President Xi Jinping is likely to get an extension of his term as leader of the party. The implementation of his ‘shared prosperity’ policy has seen many sectors of the economy come under regulatory scrutiny. This has created a degree of uncertainty for some companies.

Over the weekend, China reported a larger than expected October trade surplus, coming in at US$ 84.54 billion, well ahead of forecasts of around US$ 65 billion. Exports ramped by 27.1% for the year to the end of October while imports increased by only 20.6%.

Today, the National Development and Reform Commission (NDRC) reported that coal output has hit its’ highest level in several years. State Grid Corp. of China stated that power supply is back to normal. The utility supplies 88% of China’s power.

It’s possible that supply chain congestion might be easing as indicated by shipping costs. The Baltic Dry Index that measures the cost of shipping in the 3 largest categories of cargo ships, is roughly half of where it was at the peak in early October. However, it is still above levels not seen since 2010.

Today we have US PPI figures due out and then on Wednesday, US and China inflation will be released.

WTI crude oil moved below an ascending trend line last week. On the run down it also went below the 10 and 21-day simple moving averages (SMA). It is now challenging to move back above these 2 SMAs.

It has remained above the longer term SMAs as represented in the chart by the 100-day SMA. This could suggest that shorter term momentum is directionless while underlying longer term bullish momentum is potentially still intact. 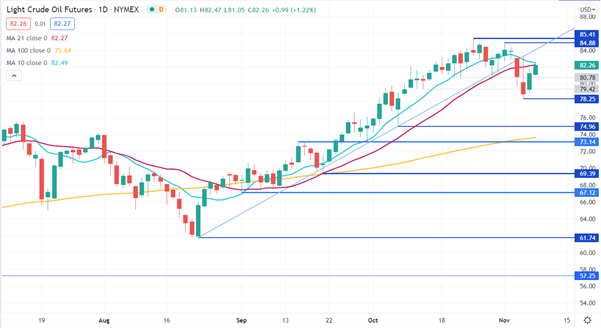