Crude oil prices pulled back over 5.5% after 4 days of gains as the International Monetary Fund (IMF) cut global growth forecasts for 2022 to 3.6% instead of the previously 4.4% expected.

IMF Chief Economist Pierre-Olivier Gourinchas was interviewed by Bloomberg after the outlook was published and outlined the rationale for the reduction in growth prospects.

He cited the dominant factor being the impact of the Ukraine war on output. Secondly, the Chinese implementation of its zero Covid-19 case policy and consequent lockdowns.

Inflation was also singled out for a problematic growth outlook due to the policy response from central banks as they try to control price pressures.

While the war is expected to lower growth outcomes, the impact on oil prices is likely to underpin the price of crude while Russian supply is choked by sanctions. On top of that, Libyan outages and OPEC unable to boost production are hampering efforts for extra supply.

China is the 2nd largest oil importer globally and expanding lockdowns are likely to dampen demand there. The Peoples Bank of China are looking to implement further stimulus measures, but the market is reading those efforts as somewhat futile. If consumers are locked in their homes, they are unable to spend any extra income.

The inflation outlook for many developed markets remains alarming, particularly in the US. Federal Reserve Bank of St. Louis President James Bullard furthered his hawkish credentials by opening up the possibility of a 75 basis-point hike at one of the FOMC meetings this year, to get back to “neutral”.

Later Wednesday, the market will be eyeing the Energy Information Administration’s (EIA) crude oil inventory report for clues on the balance between supply and demand.

The most recent peak and trough in WTI crude oil price share a similar characteristic. The high traded slightly above a resistant level and the trough traded just below a support level.

These false breaks may suggest that market liquidity is running toward stop loss take-outs, rather than building positions. From a technical perspective, this could indicate a market that lacks bullish or bearish conviction and is focussed on minimising losses. 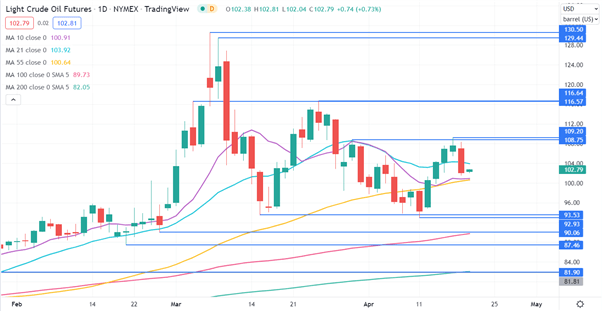