This followed a rather dismal Monday when risk aversion engulfed financial markets. Some dip buying might have been in play on Tuesday as Covid concerns, amid the highly contagious Delta variant, waxed and waned. Concerns about global growth cooled as Treasury rates climbed and the US Dollar benefitted. Strength in the Greenback may have also played a role in suppressing WTI.

Meanwhile, the American Petroleum Institute showed that the country saw an increase of 0.806 million barrels last week compared to an estimated drawdown of over 4 million. The unexpected increase in supply likely kept oil under pressure. Over the remaining 24 hours, WTI is eyeing official DOE inventory data, where a 3.9m barrel reduction is expected. Such an outcome may rekindle some upside pressure for energy prices.

Crude oil prices may be vulnerable to further losses after WTI broke under a rising trendline from early November. Still, the 100-day Simple Moving Average (SMA) held as key support, maintaining the dominant upside focus. Clearing the SMA would expose the 60.639 – 61.581 support zone followed by the March low at 57.278. If the SMA holds here, that may send WTI back towards revisiting early July peaks.

According to IG Client Sentiment (IGCS), about 60% of retail investors are net-long WTI crude oil. Downside exposure decreased by 11.21% and 13.87% over a daily and weekly basis respectively. We typically take a contrarian view to crowd sentiment, that fact traders are net-long hints prices may continue falling. This is further bolstered by recent shifts in sentiment. 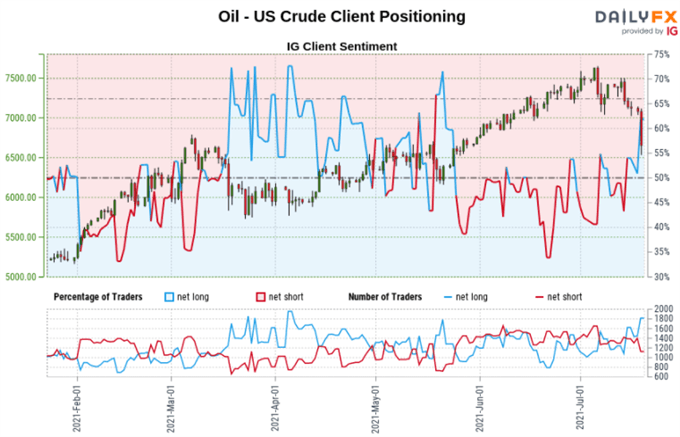